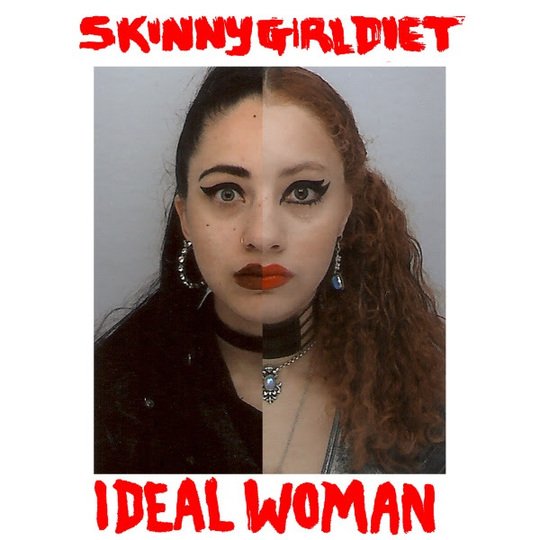 When’s the last time a band legitimately intimidated you? We’re ruling out anyone homophobic/racist/misogynist, because no one needs to seek out hate. No, I mean: before the unwritten dress codes of punk and hardcore bands calcified into the same branded leather jackets, the point of rock n’ roll was to flip off the status quo. With each passing generation, both the stiffs and the deviants seem to shift; lately, though, you can’t always figure out where the line between the two lies. Local punks make nests in their hometowns, skate by on universal tropes, and rub elbows with just their buds. Meanwhile, local multimedia pop stars form radical non-profit orgs and unify the community.

That said, even in this era of tossed-salad genres and pacified indie kids, rebels can still wield guitars as their weapon of choice. The lean & mean Skinny Girl Diet have been sharpening their blades since childhood; through a slew of venom-laced EPs, singles, and one LP, the garage-trained crew flipped off gender norms, rich kids, and dudes in general with equal whirlwind assaults. When we last saw SGD on debut Heavy Flow, they’d proven their grunge-heavy might as a trio, and flexed their muscles against the notion that pretty girls ought to write pretty love songs. Ideal Woman doesn’t back down on that stance - and even without the aid of their old bassist, Delilah and Ursula Holiday have somehow buffed up even more.

Of course, we already knew that SGD could dish out more than most amateur punks. But this time around, the duo flaunt even more of their hard rock swagger. Ursula finesses the kit like the legends, while Delilah can command her voice with more expression and scathing attitude than ever before. Tunes like ‘Witch of the Waste’ and the title track swing with undeniable Hendrix flair; closing salvo ‘Warrior Queens’ and ‘White Man’ lurch with the sluggish thunder of Black Sabbath, even as the sisters wave the freak flag high (especially on the latter jam, which we’ll explain in a bit).

The satisfying crunch of Ideal Woman might feel a bit dated at times, but the Holiday sisters offers all sorts of relevant beef to chew on. At the album’s core is the same stubborn resilience to what the patriarchy expects of femininity, as ‘Ideal Woman’ spells out the breadth of self-sacrifice that the protagonist endures to match the archetype: “I changed my hair / I changed my clothes / I changed my eyes / I changed my soul.” On the flip, “Warrior Queens” presents the proud opposite, especially as Delilah switches from suave and soulful to downright feral in a razor-flash.

However, the sisters have much more to lash out against than just misogyny. Smack dab in the middle of Ideal Woman, SGD lay bare the yawning gaps between the haves and the have-nots with a three-punch combo. More than a few underrepresented groups could pump their fists to the defiant chorus of ‘Western Civilization’: “How we gonna change the world / if we got no one?” Meanwhile, the grunge-tinted sneer of ‘Starfucker’ exposes the blind ambition that many a millennial could shake their fists at - all stars, no substantial living wage. And the 90-second hit-and-run ‘Outsider’ sums up the alienating aftershocks of gentrification in one explosive rush, as if the window for rebellion is about to collapse and SGD have only once chance to break through.

Still, the sisters reserve their biggest spitwads for the patriarch. In our era of cautious PC optimism, ‘White Man’ strikes like a knife to the jugular; Delilah oozes with snark as she sneers ”I wish I was a white man / maybe I would be on all your TV screens”. Other artists have found cleverer ways to point up how messed up this line of thinking is - but see, people expect women’s art to be clever, and SGD defy that by dealing blunt force trauma whenever possible.

That makes the Delilah and Ursula a fearsome duo to reckon with. Which means, the old rock n’ roll spirit still lives after all - it just needed to shift to new hands.