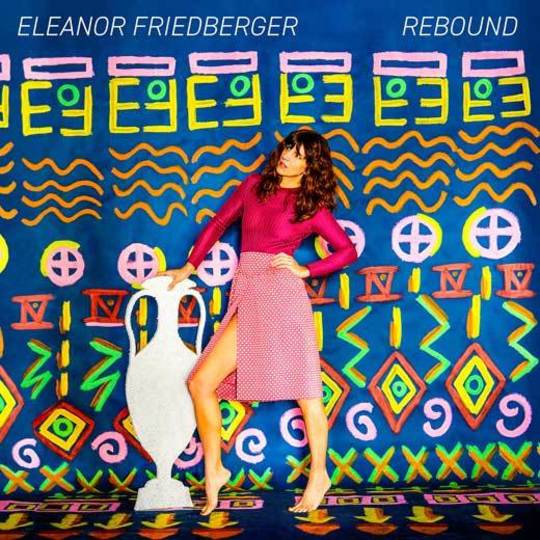 When something goes wrong and you find yourself cast adrift or in a new, unfamiliar position, you might find yourself rebounding to find a similar level of comfort as was once there, often during an undefined period after a break-up. During the political turmoil of November 2016, anyone could have been forgiven for trying to find a form of political rebound, a way of making it back to square one. As many in the United States became ever more politically active, Eleanor Friedberger found herself in the centre of Athens, a city where protest is not uncommon.

It was here that the Greek musician Σtella introduced Friedberger to Rebound, an 80s-influenced goth disco that only opened in the early hours. Friedberger describes the concept on her new record: “It’s Rebound, where time stands still/ It’s ’83, or ’82, or ’85, it’s hard to tell.” The former member of Fiery Furnaces ended up finding the inspiration for her new album in the club and, indeed, Rebound sees her shifting into more new musical territory.

Stripping back from the full band aesthetic that characterised her last album New View, Friedberger has worked mostly on her own and alongside producer Clemens Knieper for the new record. Despite being a more minimalist set-up in terms of personnel though, Rebound sounds full and dynamic at every turn, presenting a deeply layered sonic palette. She’s moved on a musical decade in just two years, giving the breezy, Seventies-tinged acoustic pop of New View an often vibrant sheen of electronic pulses and synth waves of the Eighties.

There are elements that nod to the theme of the Rebound club itself – a blast of slightly tinny, gated toms, a particular vintage tone that rings out, the dramatic, almost power ballad-esque introduction to ‘Showy Early Spring’ – but Friedberger manages to avoid a sense of rose-tinted nostalgia, grounding the album in more familiar guitar twangs and her own earthy vocals. There are times when Rebound certainly gives a very firm nod to the Eighties goth-pop that could potentially be heard in the club, but Friedberger paints this homage in her own palette, adding in some of her own idiosyncratic touches. The majority of the tracks here are deeply textured, adding and subtracting elements where needed for maximum aural impact, giving little twists and turns that keep you on your toes and encourage deeper listening.

Similarly, Friedberger’s miniatures on specific moments in life have always been worth a closer listen. Rebound proves to be no different, although sometimes her words further point to a new-found perspective. On New View, Friedberger found herself meditating on the gradual unwinding of a relationship, singing: “we are less than nothing, nothing is a perfect rhyme.” A couple of years on, Friedberger has taken on a greater totality with ‘Everything’, encompassing a number of ideas but turning the overall gargantuan concept into something hook-laden. She temporarily breaks into spoken word on the line “I mean two houses please,” simply exaggerating the wryness of the line. She kicks off ‘Are We Good?’ with a curious vignette (“I proposed to a woman for a man last night/ She said yes then cried and we kissed”), quickly following this up with “I go to ZZ Top and lose my mind”. It’s colourful, intriguing moments like these that make Friedberger’s storytelling so consistently engaging.

‘Make Me A Song’ subverts its traditional, repeated refrain of “I could love you more” and turns it into a central point for creative self-discovery, wrapping her words in references to musical terms and structure. Its short, self-reflective yet soaring hook (“It takes the ear/ To hear the waves/ And the heart/ To know you feel some feeling”) becomes all the more powerful through momentary changes in tempo, letting her words ring through the air. There’s a similar sense throughout Rebound that Friedberger is still constantly searching, looking inwards to her own processes to expand her musical horizons while creating rich, enveloping works. In doing so, she’s created an album that’s worth more time than a quick fling on the rebound, another engaging entry in her ever-expanding catalogue.