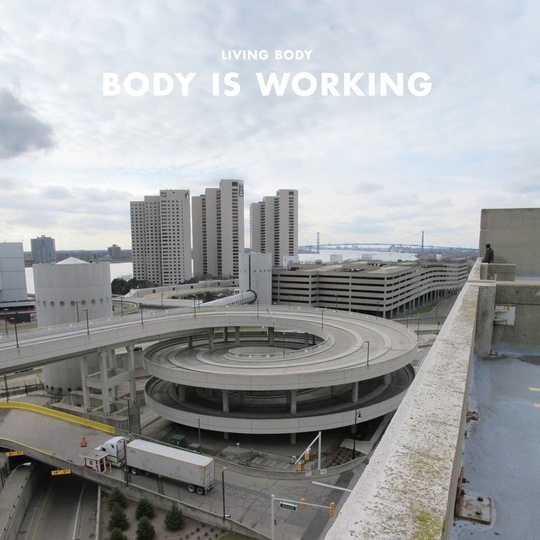 Juffage is dead. Not that Jeff T Smith is actually dead, you understand, it’s just that the exiled Chicago native’s musical ambitions have expanded beyond his previous one-man project. As such, he’s assembled a new band of luminaries from his adopted hometown of Leeds - Katie Harkin (Sky Larkin), Tom Evans (Vessels), Alice Rowan (Mayshe-Mayshe) and Sarah Statham (Esper Scout). Together, they are Living Body.

Now, one might assume that when a band describes their album as ‘post-Brexitcore’ in their Twitter bio they do so with tongue firmly planted in cheek - but in the case of Living Body, there might be more to it than that. For there is a subtle yet definite political leaning to their debut album Body Is Working - and it’s not one that approves of Theresa May’s Brexit strategy (or lack thereof).

Take opening gambit ‘Declaration of Independence’ – there’s a sense of bitter irony to the line “rest assured that I won’t vote for you,” given that Smith didn’t even get to vote on Brexit, yet still has to live with the yet-to-be-clarified consequences. ‘Choose’s time-honoured mantra of “get out while you can” probably feels pertinent to people the world over right now, while the same song also touches on the post-truth era - “it’s easy to imagine how we have all been misled.” ‘Closer’s sarcastically delivered line “I know it’s so hard/to say what you mean” could similarly be a dig at post-factual politicians, and ‘Last Few True' could be interpreted as a warning of the perils of rose-tinted nostalgia - y’know, the sort of thinking that probably had a fair hand in causing Brexit. It’s possible that I’m reading too much into the lyrics here, but at the very least I think there is some intent to be political.

If politics isn’t your bag though, perhaps post-rock is - and if so, Living Body also have you covered, though the band admirably refuse to tie themselves down to any one iteration of that genre. The album’s centrepiece is formed of its most classically ‘post-rock’ tracks - ‘Trail Mix, pt 2’ and ‘Heirloom’. The former is reminiscent of the likes of Godspeed You! Black Emperor - melancholy and almost cinematic - while the latter is the kind of slow-burning instrumental that Evans’ other band Vessels were well regarded for on their first two albums. ‘I Recollect’ sees the welcome return of Katie Harkin’s delicate yet powerful vocals, which purposefully wind their way across a reflective, almost folky backdrop. On the opposite end of the spectrum is ‘Closer’, which has a far brasher feel more akin to bands like Cloud Nothings. If there’s one track where the various facets of the band come together perfectly, it’s ‘Last Few True’ - with Harkin’s angelic vocals juxtaposed against a swell of melancholy guitars before the track ends in a glorious burst of noise.

Body Is Working may be a relatively compact album at only nine tracks, but it’s more than adequate proof of both their political intent and their rejection of genre constraints - and both of these things make Living Body worth keeping an eye out for into 2017 and beyond.