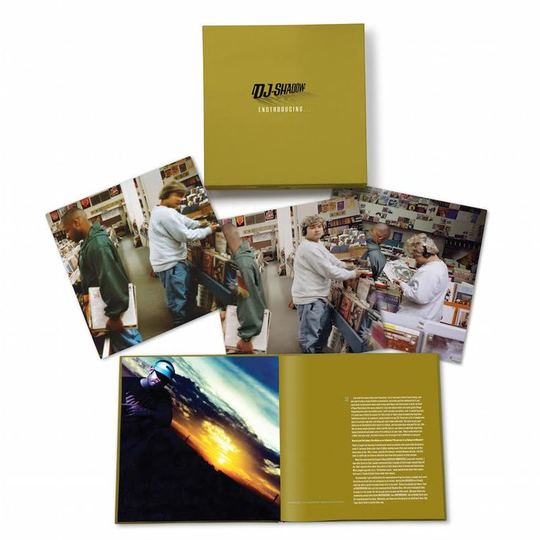 Endtroducing was the first hip-hop record I bought (closely followed by Wu Tang's Enter The 36 Chambers). To be honest, at first it didn't quite make sense. The idea of sampling appealed to me but it took a while before I could apply this aesthetic appreciation to an actual love and understanding of the music itself. I remember listening to the record over and over again, trying to make sense of its collages of drums, movie samples and guitar fragments. Even if this wasn't your first hip-hop album, it can be a difficult record to get your head around. DJ Shadow is an aptly-named phantom as his tracks have a melancholic, often bittersweet feel rare to much other hip-hop (one notable exception is Clams Casino who provides a remix here). These are tracks full of reverb, delay and empty space. Shadow is not unlike the first dub producers who removed vocals from their tracks. They all realised that by removing something, they could paradoxically add something to their music. Without a rapper taking centre stage, these tracks are able to become something else entirely. Hip-hop's in-your-face extraversion becomes a haunted introversion.

In the documentary Scratch, Shadow looks around the basement of Rare Records, the album cover's record store, wondering aloud about the failed careers of the forgotten bargain records he uses as his primary material. Shadow's lament for these forgotten voices seems to be something he tries to capture on his own record. Shadow has often been frustrated with his placement in 'electronica' rather than 'hip-hop' categories - this placement makes both perfect sense and perfectly little. The album is clearly hip-hop in its composition of dusty breakbeats and sampled movie dialogue. At first it sounds like something of a cousin to RZA's production style. However, the way these elements are used suggests something totally non-hip-hop as we previously understood the term. The effect is closer to Simon Reynolds definition of post-rock in relation to rock: post-rock uses the same instruments but to create a totally different effect. These aren't block (party) rockin' beats but a sort of home-listening for b-boys and, more likely, bearded hipsters like me.

This 'deluxe' edition adds two discs of extra material. The first disc of extras was already featured on previous deluxe editions and was inessential even then. As with almost all packages of alternative versions or demos, they're of basically little interest to anyone who isn't currently rifling through the artist's bins. The disc itself is entitled 'Excessive Ephemera' which I appreciate was titled in an ironic, self-deprecating way but is probably a much smarter criticism than anything I could come up with. The most interesting part of this disc is the set of Shadow playing live in Oxford on the BBC in 1997 .If this disc was made up of more things like this, it could've been more interesting. Although if they do have more material like this in the vaults I'm sure they'll save it for a different, unrelated package.

The remix disc adds remixes from a host of artists including two of the most influential (and inconsistent) producers in all of modern hip-hop: Clams Casino and Hudson Mohawke. But Shadow's work on Endtroducing feels so multi-dimensional and difficult to pin down, these remixes end up feeling stuck in the framework that Shadow's music gives them. That being said, this disc is much better than the last (but, then, remix discs as a 'genre' are generally much better than alternative versions discs). Again they're largely inessential, but remixers like the Teklife crew, Salva, Teeko, Bondax & Karma Kid provide worthy remixes to the originals.

Overall this package is totally unnecessary as anything except a cash-grab. In some ways, though, I feel harsh criticising it as this is just the sort of thing the music business has to do sometimes to stay afloat in our world. Music is, after all, a business, even if we like to romantically believe otherwise.