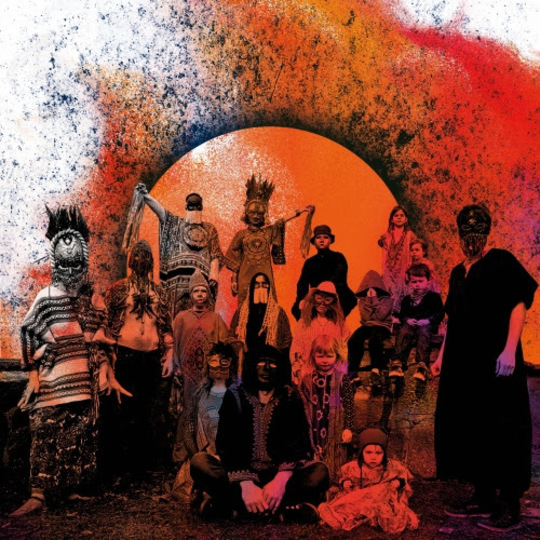 Goat have dealt in the element of surprise since their debut record World Music appeared in 2012. Little was known about them then, other than that they hail from Korpilombolo, Norrbotten County in Sweden - a place they also claim is a place with a history of voodoo worship - and little more is known about them now. Thanks to the tribal style masks they continue to wear when performing we don’t even know what they look like. Refreshingly, aside from these small details, the only known and tangible thing we have is the music. The mystery, in a culture that thrives on ‘personality,’ is really quite a liberating experience for the listener.

Conversely, the scrap of information that refers to the voodoo practices of their home is a nugget that could be directly linked to the music, particularly their first record. Seemingly, their particular fusion of afrobeat rhythms, psychedelia and rock came out of nowhere, and it was unique, but you could certainly sense deep voodoo cadences. There was a dark undercurrent and heaviness to tracks like ‘Run To You Mother’ and ‘Goatslaves', from their 2014 follow up Commune. Perhaps in an effort to keep the mystery alive there is no such black magic on Requiem.

Or, they’re just feeling really bloody upbeat at present. ‘Djôrôlen/Union Of Sun And Moon’ opens the record, and it’s as jolly a tune as you’re ever likely to hear. Rather fittingly birdsong is the first sound on the album, then vocals that sound strangely distant - then unceremoniously jangly beats and cheery pipes herald what sounds like an invite to a hippy jamboree. If you’re feeling oddly suspicious at this point, and are fashioning concern over the lack of ominous grit you have two options; either move on now or allow the particular charms of this record to seduce you. And seduce you they will, or at least they should.

The following track ‘I Sing In Silence’ is a wonderfully laid back number that gets you with its gentle yet insistent groove. ‘Goatband' has some lovely guitar interplay and some jazzy sax that tips it into soul territory. ‘Try My Robe’s’ afrobeat rhythms are compulsive and those looking for a more familiar Goat sound will no doubt enjoy the distorted guitar riffage of ‘Goatfuzz'. And essentially, Requiem is not as great a departure as it might first appear. It is a gentler record, and one who’s overall vibe is less forbidding. Yet the more positive quality that it exudes is still rendered within the unusual mix of western and eastern musical tropes that Goat set forth with on their debut.

If there is to be any criticism it that perhaps the band have settled into a groove a little too much. There is a certain familiarity on many of the tracks. Songs like ‘Alarms’ feels like it could have been made in the Sixties by any number of Haight-Ashbury haunting hippies, as lovely a tune as it is. And there isn’t anything that blows you away quite like hearing a track like ‘Goathead' for the first time. That said, they have made some really beautiful music on this record, like the impossibly lush ‘Goodbye’, and as ever the myriad of details they layer each composition with means that it is a record that can take heavy rotation.

Goat haven’t set the world on fire this time around, but they continue to make alluring, fascinating and significant music. On their third they have assembled a warm and more open record that doesn’t sacrifice their inherent mystery.