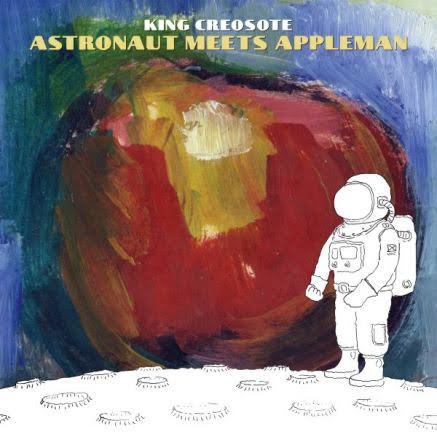 'Astronaut Meets Appleman' follows King Creosote's breakthrough record 'From Scotland With Love' (2014) and his Mercury-nominated collaboration with Jon Hopkins, 'Diamond Mine' (2011). It arrives replete with a chamber-rock rabble and then some: harps and bagpipes come as standard, as does silence. The opening track 'You Just Want' is a seven-minute piece of hymnal drone-pop, its touchstones are the art of patience, scenes of mild bondage and Venus (in Furs). Elsewhere on the record, 'Melin Wynt' is a lilting bagpipe-techno odyssey. This sense of place, disorientation and absence (in space, time, nature, hearts) underpins 'Astronaut Meets Appleman' - most literally, perhaps, in the silence that unfolds amidst crestfallen lullaby 'Rules of Engagement'. Or, as he intones on philharmonic lament 'Faux Call', "it's the silence that somehow says it all". The KC idiom - equal parts geometry, self-deprecation, cosmic wonder and seafaring poetry. It was variously recorded at Analogue Catalogue in Ireland's County Down, An Tobar on the Isle of Mull, and Glasgow's Chem19 studios (HQ of long-time ally Paul Savage, who co-produced the LP with KC). On 'Astronaut Meets Appleman', King Creosote is still upsetting apple-carts and dealing with the fallout, still appraising love and life, the moon, the stars; tide tables, bagpipe scores, zeros and ones; mathematics, ticking clocks and the beat of our hearts.
description from www.roughtrade.com