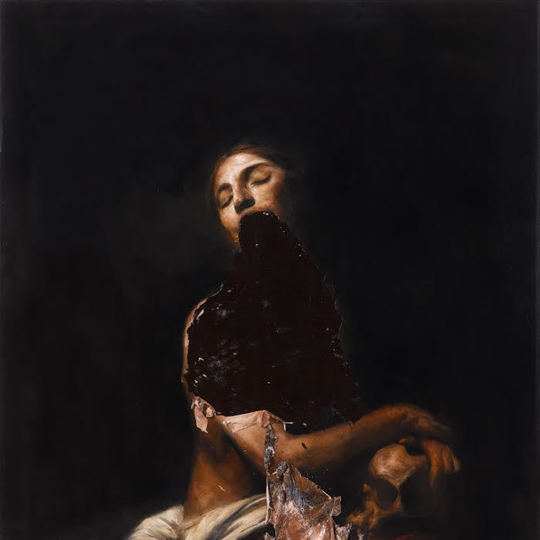 So here comes Finn Andrews’ indie-dark-pop outfit again, back with the sixth album of their 15-year existence (if you count 2011 EP Troubles of the Brain), since The Veils' London-NZ beginnings in the early Noughties.

So what, in 2016, does this goth-inflected, stylishly troubled, sensitive-with-undercurrents-of-the-sinister outfit have to offer? Well, it turns out: pretty much the same as they always have.

So fans of the dark side will be pleased to know that the symbolism and imagery remains firmly pegged to black. Andrews strews his songs with religious references, a possessed Preacher Man gone to the bad, from opener 'Axolotl’s declaration “who needs the devil when you’ve got the Lord” to song titles overtly referencing Satan ('Low Lays the Devil'), to exorcism and demon references aplenty ('A Bit on the Side').

The vocals vary wildly, from a kind of spooky, treated quality that lends an edge of melodrama to tracks like 'Do Your Bones Glow at Night' and 'Axolotl' to the declamatory storytelling on 'King of Chrome' through to a more human and engaging delivery as found on 'Swimming With Crocodiles', almost Seventies soft rock-style, and the sincerity of stand-out ballad Iodine and Iron.

This latter is The One: that Veils song that crops up periodically on one of their albums (previous examples include Nux Vomica’s 'Advice for Young Mothers to Be' and 'The House She Lived In' from Sun Gangs) and knocks you for six, reminding you of just how right they can get it. It’s a ballad, complete with piano and strings, and all the more intense for the understated way that it is delivered, Andrews singing “I feel as mad as the moon, and twice as scarred” (what a line!) and almost breaking your heart as he does so.

Also great is 'House of Spirits': although it’s probably one to avoid if you find unshakeable earworms a problem. Against a laconic beat (presumably courtesy of El-P, the slightly surprising co-producer of the album), and a very ‘Veils’ lyric (“I’m not welcome in this house of spirits any more babe”), the rhythm is moreish, repetitious and totally hooky. The vocodered backing vocals come off like spirits from the eponymous house, it’s not entirely clear what it all means (there are hints about mysterious letters being written, threats of houses being burned down) but it’s enjoyably spooky and quite, quite addictive.

So it’s worth putting up with some of the more hackneyed points – 'A Bit on the Side’s tired sub-Primal Scream drawl and lazy sexism (“She’ll only love you till the money runs dry”, yeah, yawn); 'King of Chrome’s rather unconvincing grandiloquent characterisation (“He’s got an eye for trouble and a broken heart… He drinks elixir from a plastic cup…” etc) – for the best moments. Andrews, when he wants to be, is an adept lyricist: pleasing rhymes like Here Comes the Dead’s “Hog mad with fear / It’s pandemonium in here” and evocative imagery as in 'Do Your Bones Glow at Night' along with some of the more tender moments make this an ultimately satisfying listen, if you can get beyond the slightly sixth form I-was-a-teenage-goth atmosphere that pervades.

So in the end, El-P’s beats and the electronic edge that he brings to one or two corners notwithstanding, this is The Veils as you would expect to find them, untroubled too much by changes to their formula. And that’s just the way that most of their loyal fans would probably want it.