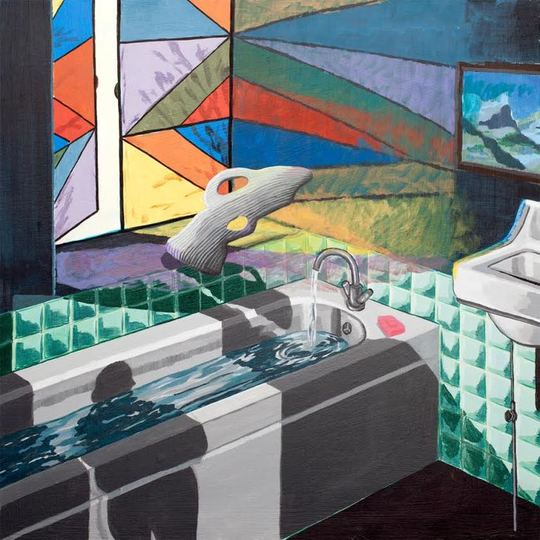 Whereas more straightforward subgenres of rock challenge their listeners (and sometimes compete with each other) with 'heaviness', Cold Pumas opt for the shoegazey version of intensity on and challenge their listeners instead with dissonance, duration and repetition, stretching out musical ideas and letting them lead into more ideas, and into more from those. On their new release The Hanging Valley it works really well, creating an intense yet surprisingly accessible album.

The harmonies they create using suspension and dissonance are often beautiful, from the sus 2s and major 7s of ‘Slippery Slopes’ to the minor 7s of ‘Open Mouth of Dusk’ to the dominant 7 sus 4s etc of ‘A Human Pattern’. You could quite easily sit listening to The Hanging Valley without paying attention to a single lyric, and simply analysing the harmonies, so rich and fascinating are they on every track. Cold Pumas have a great sense for resolution too, so the final cadence of every song feels totally satisfying and 'right'.

The concentration The Hanging Valley takes to get the most out of it makes it easy to imagine what a rich, intense live experience it would be. It also makes the album feel like it’s for rare, specific listening, for a certain mood and for your total undivided attention, as opposed to being an album to get addicted to and listen to on repeat. Having your concentration challenged for 38 minutes straight, and for songs that sometimes last over five minutes, makes this a bit impossible to listen to over and over.

For such an all-consuming record, though, The Hanging Valley is surprisingly easy to listen to, only rarely creating the sense that it’s trying to see how much its listener can 'take' (one of these moments being the Joy Division-esque repetition of “suppressing” in ‘Severed Estates’). The melodies of Cold Pumas’ riffs are really pretty varied throughout the album, and they weave easily between darkness and light. After the first two, relatively intense, driving tracks, ‘A Change of Course’ has a self-conscious lightness that refuses to settle into resolution until its choruses. The riffs, though often repetitive, are often backed by distorted, distant sounding rhythm guitars, so no song feels gratingly slick.

The longer songs like ‘Fugue States’ often have great build ups, and Cold Pumas know just when to swell and fade. The only thing is, the nine long songs make the album feel a bit of a long one. There’s a sense of being 'finished' after every single track, and it often feels like you’d get the same experience but quicker listening to any single track individually instead of the album as a whole. The album perhaps feels a bit ponderous as a whole piece, and to be honest it’s difficult to listen to all the way through, because even though the whole set is only 38 minutes, each song is long enough to push your capacity for concentration somewhat. Which is at first, but then, towards the end of the album, can get a bit wearying.