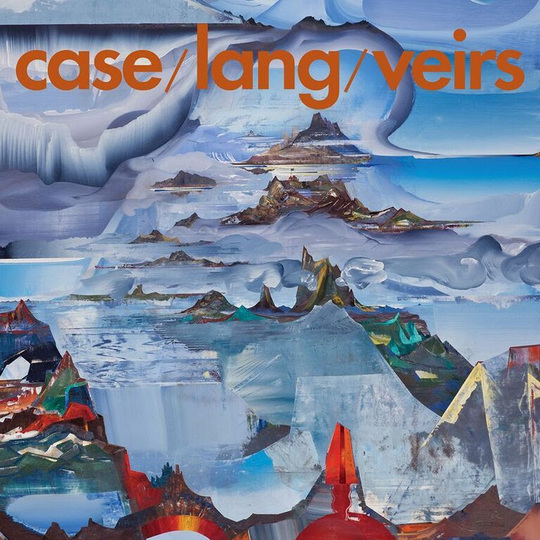 A quick glance at the track listing of ‘super group’ case/lang/veirs’ eponymous debut reveals a preoccupation with the elemental, the sublime and the mysterious, ‘Atomic Number’, ‘Best Kept Secret’ and ‘Supermoon’ being a few choice titles. The record’s artwork itself is striking in this respect, featuring surreal, otherworldly landscapes of fire and ice. The music is full of lush strings, harmonies and striking lyrical imagery, creating portraits of worlds and lives within which to get lost.

As an indie kid with occasional alt country leanings, I have followed Neko Case and Laura Veirs very fondly over the years. I never particularly got into KD Lang, though I’ve held a soft spot for her ever since seeing her on Later with Jools Holland back in the Nineties during my early queer awakenings, at a time when representation in mainstream culture was, even more so than now, exclusively reserved for straight people. In any case hearing that the three were making music together came as an exciting surprise, particularly as my first exposure to the trio was the gorgeous, string-laden album-opener ‘Atomic Number’. Vocals are doled out fairly equally between the three, swapping or sharing lines, intoning, “Why are the wholesome things the ones we make obscene?” The song manages to be beautifully cool and tender with a hint of darkness at the edge.

At plenty of points the record lives up to this early promise. My favourite songs are the anthemic indie pop or stripped down alternative folk numbers which bear a resemblance to Neko Case or Laura Veirs’ solo work. ‘Song for Judee’ is an infectious, in-the-gutter-looking-up-at-the-stars, wounded cowgirl song with it’s refrain of, “You loved the sons of the pioneers and the hollywood cowboy songs/You were just trying to put a hand to where we are”. ‘I Want to be Here With You’ exalts the creative misfit and how hard it can be for such a person function in the prison of ‘normal’ society: “My friend is an artist/doesn’t fit in/lost two front teeth/can’t keep a job/but the things you make/they are so beautiful”. ‘Supermoon’ is dusty, mysterious, stripped down country and mighty fine at that. ‘Best Kept Secret’ is a joyous romp with echoes of Camera Obscura that reaches straight for the dopamine receptors. There are elements of cheese to the latter with its ‘badadop badodop badadop’ backing harmonies, but that’s all part of the joy.

I’m torn as to how I feel about a couple of the more easy-listening style, slow tracks. ‘Why Do We Fight’ is as schmaltzy as its title suggests and ‘Blue Fires’ feels like a step down following on as it does from the raw melancholic vibrancy of ‘Song for Judee’, its polishedness making it sound somewhat corny by comparison. However, put in the context of a record which has many moments of melodrama and is all the better for it, these tracks start to make sense. ‘Honey and Smoke’ sounds like an alt-take on a Broadway musical with its many harmonising ‘ooohs’ and chorus of ‘I know (I know I know I know I know) it’s all honey and smoke’ but this is definitely a good thing.

case/lang/veirs is a record full of compelling, tender, starry energy. The chorus to ‘I Want to Be Here With You’ pronounces, “The hungry fools who rule the world can’t touch us/Surely they can’t ruin everything”. On reflection I’m not sure if that’s true, but for a moment when engrossed in the charm of case/lang/veirs, it feels like a genuine possibility.