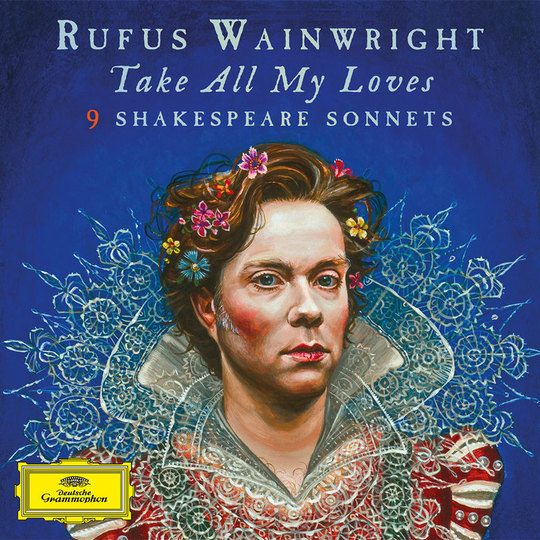 Rufus Wainwright has chosen to celebrate the 400th anniversary of Shakespeare’s death in characteristically flamboyant style. He’s plucked nine of the Bard’s 154 sonnets, a host of guest stars and the BBC Symphony Orchestra for an album of adaptations of varying formats and styles. Like his opera Prima Donna, it’s another example of him creeping further away from the singer-songwriter format of records like Want One and Want Two. But even on those records, his theatrical side was ever present, and on Take All My Loves he gets to indulge his inner thesp along with his pop and classical inclinations.

The record flits between readings and musical interpretations of these 9 collected sonnets. The design of the album is such that it isn’t until the third track that we hear Wainwright for the first time. The record opens with a recitation of ‘Sonnet 43’ by Siân Phillips, followed by Austrian soprano Anna Prohaska’s sung version. So far so trad. Wainwright’s first vocal performance on ‘Take All My Loves, Sonnet 40’ is another matter. It’s a more modern composition of layered vocals and almost tribal pulses. What this trio highlights is how differently you hear the texts in their respective formats: not just for the letters modern composition but also because the musical versions are more communal – Wainwright’s even more so than Prohaska’s. They’re no longer a lone voice in the dark speaking to an absent listener but become a more universal declaration.

In some respects the recitations, although useful as a reference point, seem superfluous to what Wainwright is trying to achieve. With no disrespect to the readings on the recording, if you want to hear these texts read you could just as easily turn to the 2002 album Let Love Speak; a recording of 54 of the sonnets read by a diverse array of performers ranging from from Ralph Fiennes, Fiona Shaw and John Hurt to Annie Lennox, Keb Mo and Bryan Ferry. In this instance, it really is the musical interpretations that carry the weight of interest.

There are exceptions of course. Who doesn’t want to hear William Shatner intone these immortal lines? And of course, with the recent Star Wars release it’s even more inevitable that it is not Carrie Fisher you hear on ‘Sonnet 29’, it’s Princess Leia speaking the words to Han Solo - a wonderfully odd sensation. Both are a typically Wainwright move; he is, after all, an artist in thrall to popular culture of all kinds.

As his Rufus Does Judy at Carnegie Hall album suggests one cultural corner he has a deep love for is show tunes and that influence creeps onto the record on many occasions. ‘Unperfected Actor’ is full of drama, theatrics, and mock rock bombast; ‘Th'Expense of Spirit in a Waste of Shame’ is pure musical theatre and 'All Dessen Müd’s Thirties stylings wouldn’t be out of place in Cabaret. Dropped in the pot with the more operatic tracks and pop tunes it can make for a sometimes choppy listening experience.

There are two songs that really stand out on the record. ‘A Woman’s Face’ has a hugely affecting melody and Prohaska approaches it with a lush delicacy. Similarly, on the ‘Reprise’ (there had to be one) Wainwright proves for all his rakish bluster he can be strikingly tender. He chose to perform ‘When in Disgrace with Fortune and Men's Eyes’ at the RSC’s celebrations in Stratford, and there’s little wonder why. Its prepossessing billowing tune is served well by Florence Welch’s uncharacteristic restraint. She harnesses her too often overused vocal ability to perform this beguiling tune with charm and warmth.

On paper, this is an album that screams ostentatious self-indulgence. To Wainwright's credit, and possibly that of his mischievous nature, he has steered it from outright pretentious arsery. The mix of genres and presentation doesn’t always segue as well as they might, and strangely given that mix, it could do with being a little more radical at times. That said there’s plenty to enjoy and it’s often fun to hear these iconic works in unfamiliar fashion.