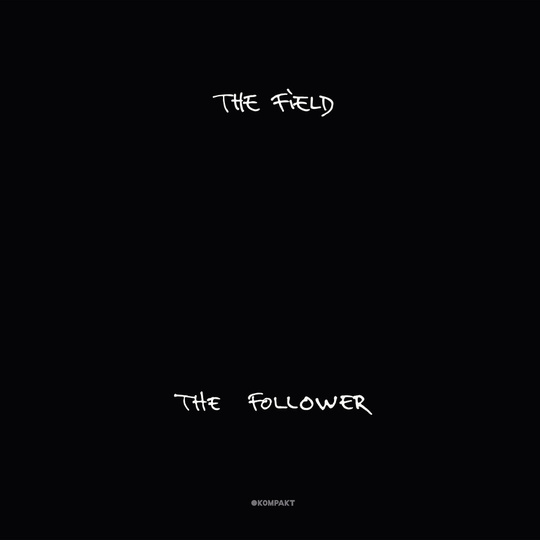 Back in 2007, The Field’s debut LP From Here We Go Sublime was very rightly heralded as an amazing, unique album: a techno record that was all at once thrilling, uplifting yet technically fairly simple - much was made of Axel Willner’s ability to string out blissful techno using nothing more than a few cut up samples and a relentless 808 kick drum, and on The Follower, his fifth record for legendary German label Kompakt, nothing seems to have changed that much in the past nine years.

Indeed, his minimalist template is still very much employed, but ironically, it’s when Willner is expanding his sonic pallette which makes for the more interesting things here - the whirling modular synths that cascade around the title track, or the acid workout that closes ‘Monte Verita’ being good examples of perhaps where Willner should’ve headed, instead of the classic sample heavy sound which makes up most of the album.

That’s not to say that the record doesn’t have its moments though, and there are times where you feel that he’s well and truly nailed his sound - the first half of the aforementioned ‘Monte Verita’ is perhaps the most Field sounding thing he’s ever done, and it’s definitely one of the better things here.

Sadly though, there’s also plenty that feel like wasted opportunities, and golden ones at that. ‘Pink Sun’ employs a particularly nice set of guitar and vocal samples, yet does nothing but meander for its near-nine-minute run time. The constant awkward key shifts don’t help, and at times it’s like listening to an algorithm searching for the correct key to stick in. Still, nice rhythm section.

That driving, hypnotic sound that Willner trades can be a bit of a double edged sword, and a difficult thing to get right, but when he does get it right, you get things like the wondrous ’Raise the Dead’ - a euphoric krautrock-flavoured slow burner of a track which barely moves from its ambient haze for about 11 minutes, but doesn’t really need to.

It’s a shame it’s sandwiched between another barely-there transmission in ‘Soft Streams’, which plods for a good ten minutes before petering out under the strain of muddy samples matched to a jaunty triplet rhythm, and ‘Refracting Lights’, the album’s trudgy closer. That the record closes on such an anti-climax is a bit disappointing, as you can tell there’s some kind of idea at a crescendo towards the final moments of its 14 minutes, but it never really comes off, and you’re left patiently waiting for anything to happen.

There are flourishes of something remarkable trying to break out here, and given maybe just a little more time, or a lesson in brevity, I’m sure The Follower would’ve been a more enjoyable listen. Unfortunately, it tends to get bogged down in flurries of samples that either aren’t good enough (the muddy, confusing mess in ‘Soft Streams’) or just not used properly (the key change-tastic ‘Pink Sun’).

Not one to leave things on a negative note though, The Follower is a decent enough record, and is worthy of your time, but lacks that special something that sets The Field apart in the techno world.