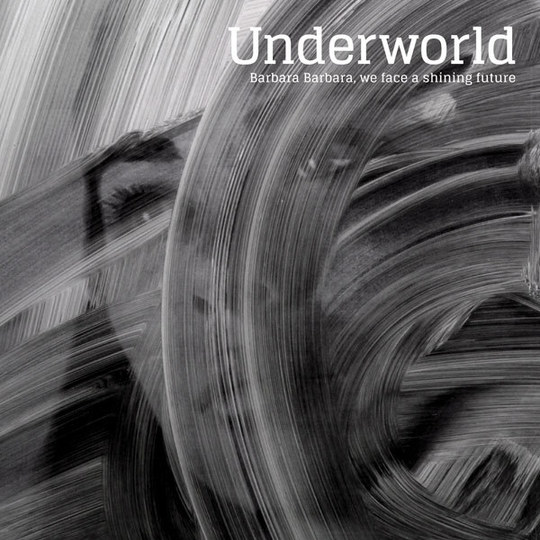 Underworld have the most unlikely of narratives. Although founded in the late Eighties by Rick Smith and Karl Hyde, the first two records they released are often referred to as Underworld Mk1. 1994’s Dubnobasswithmyheadman is generally considered their first record as the Underworld we know today. The techno/rock fusion created on that album united indie fans and club goers alike - and then Trainspotting landed. The soundtrack featured two of the band’s songs - 'Dark and Long (Dark Train)' and the former b-side 'Born Slippy (Nuxx)'. The latter blasted them into the wider public consciousness and became one of the biggest anthems of the Nineties.

That could have been that, but in the interim years the band have continued to produce pioneering electronica whilst dipping their toes in other worlds. Their ongoing collaborations with Trainspotting director Danny Boyle have seen them create the music for his production of Frankenstein at the National Theatre - including the shimmering 'Dawn of Eden' – and not least their duty as musical directors of the Olympic opening ceremony, for which they also penned the glorious 'Caliban’s Dream'. At this rate, Underworld could be in danger of being crowned with that most vapid of titles - national treasures.

But fear not. The band have rejected resting on their laurels and basking in their veteran status. On ninth album Barbara Barbara, We Face a Shinning Future, lead single and opener ‘I Exhale’ finds them on familiar territory. It’s classic Underworld, complete with driving beats and Hyde’s hypnotic vocals. ‘If Rah’ continues in a similar vein with a relentless thump and urgent synths that build into arm raising riff that the band are experts in, while the lyrics wryly note, “You don’t look old enough to have suffered so much, but what do I know.”

One of the most striking factors of the album is its joyous and hopeful outlook, as hinted at in the title. The record’s name is one of the last things Smith’s father said to his mother before she died (they were married for 62 years), and that sentiment inhabits every one of the songs on the album. ‘Motorhome’s gentle pulse, charming melody and repeated counsel - “Keep away from the dark side” - and ‘Nylon Strung’s’ shiny rhythm and "“Open me up, I wanna hold you, laugh with you”" refrain are symptomatic of this open-hearted record.

It’s often difficult to fathom that Barbara Barbara, We Face a Shinning Future is the work of men rapidly approaching their sixth decade on planet Earth, such is the records vivacity. Granted it doesn’t have the addictive frenzy of former recordings like ‘Rez’ or ‘Cowgirl’, that is replaced by still danceable but softer ‘Ova Nova’, which drops a hefty beat, but as Hyde says, “I’m chilled, I’m chilled.” And 'Low Burn' is a slow burn, but no less affecting for it. As one of the album’s highlights it begins with opulent strings, introduces a pounding beat and rises with layered vocals that offer a simple but stirringly optimistic mantra - “be bold, be beautiful, free, totally, unlimited”

In their fourth decade making music together, Smith and Hyde are pushing forward into a shining future in which Underworld have forsworn the well-trodden path of replication and opted instead for another path. Gone are the tub-thumpers of yore in favour of understated, yet nevertheless, euphoric electronica bursting with hope.