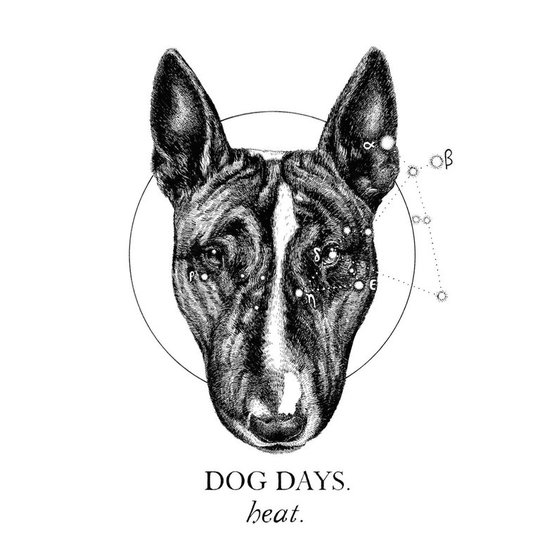 Instrumental stoner-rock trio Dog Days are a relatively unknown commodity outside Switzerland's small, fragmented music market. However, with the power of the eight tracks from this debut album, Heat, it's difficult to imagine them remaining that way for long.

The band's impressively heavy sound was recorded live at Studio De La Fonderi in their native Friborg in two five day sessions. The tattoo-clad rockers' ballsy detuned guitar playing, full-throttle drumming, and psychedelic dabbling’s channels the likes of Kyuss, Sleep, and Karma To Burn. Meanwhile, the album pays homage to the undeniable influence that Led Zeppelin had on the riff-led stoner rock sound. The cut 'Kyi Apso' even leads into the riff from 'Black Dog' for a moment, which substantiates how integral Jimmy Page was - alongside Lead Hound - to the birth of stoner rock as a sub-genre, and how much of a personal influence they are on Dog Days' sublime guitar riffing skills.

The catchiest display of axe work is the second track, 'Shiba', and it comes as no surprise that it's the one they've made a video so far. It's easy to imagine John Garcia of Kyuss laying over a fantastic vocal take over this. However, being solely instrumental works for this band. It holds a refreshing middle finger up to convention and they've executed exactly what they want to do for the love of what they do, and nothing more.

Of their key influences, West Virginia's Karma To Burn have the closest parallels in this regard. It was only because they were forced to hire a singer for their debut album by their label that they didn't release an instrumental album as a debut. In contrast, Dog Days have been able to stick to their guns from the off.

The other trait - beyond not having a vocalist for commercial purposes - that gives this band rock n' roll credentials is that Vinvent Yerly (guitar) taught his bassist Marie Riley from scratch. Riley already knew the double bass, but Yerly taught her electric bass and built her a custom P-Bas. The album's immaculately tight, heavy playing also owes a lot to the hours spent developing a close musical bond together. 'We're almost like siblings,' she states in the interview. The chemistry certainly comes across on the album.

Whilst Heat demonstrates this tight hard playing, it's the track, 'Komondor', that shows the aforementioned psychedelic influences the most prominently. The tempo is reigned in for a more opiated section, before building by the end. This is heavy music at its most melodic, experimental, and enjoyable. Kyuss would be proud.

Death of a Bachelor