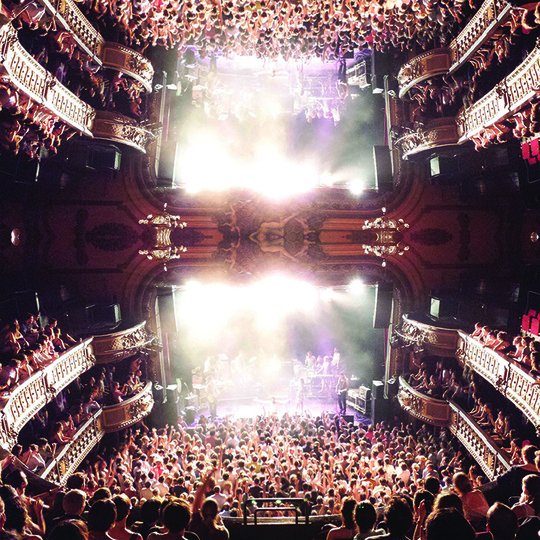 “I’m only loving the truth”, Alex Ebert sings on 'Truth', so let’s all come together right now and wash out all lies in the purifying black waters of honesty - hardly anyone would care about this band if it first wasn’t for ‘Home.’ Aside from the nostalgic country vibe, the true mesmerism driving that song is its spontaneous nature, as if an aghast Ebert and Jade Castrinos wrote and recorded the track together in one passionate fell swoop. It’s that energy that prevailed in light of endless critics out for Ebert’s head after he abandoned his punk-rock Ima Robot roots for the roots rock, Surrealistic Pillow vibe of Edward Sharpe and The Magnetic Zeros. ‘Home’ silenced a lot of potential would-be detractors who would have otherwise dismissed all the reformed-addict-turned-hippie shtick.

Sharpe may be a fictional hero nobly trying to save the world, but his problem of getting distracted by girls may not be fictitious at all, because an overwhelming majority of the band’s fans first gravitated toward Ebert’s newfound crew after hearing Castrinos’ breathless howls to the nothingness for the first time on ‘Home,’ and were continuously 'distracted' after hearing songs like ‘Janglin’ and ‘Better Days.’ But after being fired early last year, Castrinos is no longer a member.

Ebert’s decision to release a live album of 21 songs is musically the most fascinating chapter in the ongoing saga of Sharpe, and seemingly a perfect remedy to silence all those critics he sings of in ‘Truth’ deriding him as a “faker.” The band’s songs are meant to be heard, experienced, and even recorded in a live setting, but with Castrinos's presence accounting for the bulk of the album’s more mesmerising moments, it’s a further testament how critical to the band’s success she has been thus far. A performance of ‘Better Days’ at Brixton Academy commences Live: In No Particular Order, and the song is so particularly placed it renders the title a complete yarn. It dons a new meaning of its own as Ebert and Castrinos harmonise “try to remember that you can’t forget” together. What follows is an equal parts exciting and depressing sonic time capsule of the band’s better days.

Ebert’s lyrics are much more satisfying when is he performing them live, such as on ‘Janglin.’ In this figurative and literal arena, Ebert’s fervent wailing bleeds dynamism and authenticity. But the ultimate star of the show is unquestionably Castrinos. Her gigantic Grace Slick-Janis-Joplin-esque vocals eclipse Ebert on the chorus, and the overwhelming applause she receives before she begins her verse seems as complementary to the song as the acoustic guitars. During the bridge, Ebert invites an audience member onto the stage, and the rendition is even superior to the original.

As spontaneous as they may sound on studio records, it is the communal essence of the band’s shows that make the neo-folk, “unity through music” message complete. On ‘Home,’ the band’s signature ‘I Can’t Get No Satisfaction’ song, they still manage to get their ya-ya’s out by slightly changing the lyrics around and inviting audience members to recount their own heartfelt “falling out of the window” stories. Regardless of the amount of critical vitriol the band has received over the years, their loyal congregation is an undeniable validation statement, and the call-and-response interplay between musicians and fans creates an invigorating atmosphere.

Audience members screaming out 'we love you!' amplify Ebert’s evocative vocals on ‘Please,’ and rampant cheering aids his exhausted moans on ‘This Life.’ But the way the album is structured, Castrinos’s presence is much less apparent in the second half. Songs like ‘Truth,’ first recorded for Ebert's solo album Alexander, are testaments that he is both a gifted singer and songwriter, but as a whole, the band’s songs featuring prominent Castrinos vocals account for most of the band’s greatest achievements. Mostly vanishing on ‘I Don’t Want To Pray’ and reemerging for a thunderous performance on ‘Life Is Hard,’ suddenly the Sharpe experiment isn’t nearly as captivating anymore, and the community vibe is lessened when one key member seems missing.

A 25-second collage of distorted concert noise titled ‘All Together (Live)’ following ‘All Wash Out’ to close out Live: In No Particular Order is as handpicked a move as any in the Sharpe history. Castrinos's muffled voice still manages to unveil itself clearer than any other sound in all the distortion, and the band’s loyal fans are left to ponder what the band will sound like now that one of its key members is missing from the equation. In truth, Castrinos is neither Slick nor Joplin, and the band could more than likely find an equal if not better vocalist. But like Edward Sharpe himself, Castrinos has proved to be a crucial character in both the band’s folk and folklore, and for better or worse, Ebert and co. (company and community) are going to have a difficult shaking time that particular shadow.