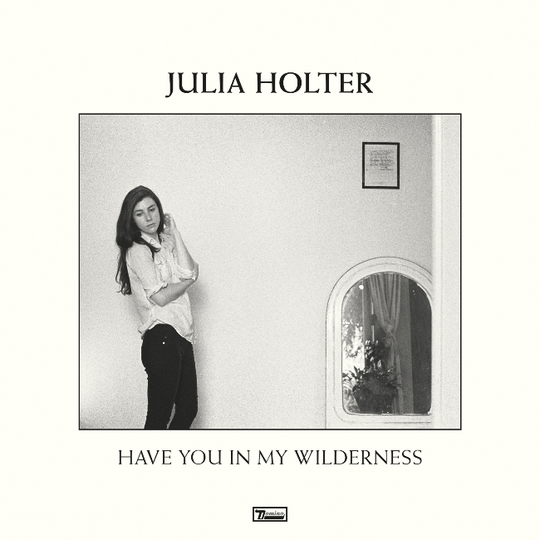 For the pleasing symmetry of its bookending syllables, its general euphony and the raft of images it evokes, ‘wilderness’ is a wonderful word. A variant meaning, courtesy of the Oxford English Dictionary: ‘a piece of ground in a large garden or park, planted with trees, and laid out in an ornamental or fantastic style, often in the form of a maze or labyrinth.’ I wasn’t aware of this usage, but perhaps Julia Holter was when she named her fourth album. Not necessarily because she intends the wilderness she claims be interpreted in this sense, but because that definition could so easily apply to her music.

‘Ornamental’, ‘fantastic’, ‘maze’, ‘labyrinth’. These words make perfect sense in the context of Holter’s songs. Have You in My Wilderness drops the overarching themes which informed her previous three albums in order to accomplish something more intuitive and intimate. The L.A.-based singer has spoken about how this resulted in some tricky recording sessions, telling FACT Magazine that ‘with previous records where there was a clear vision it was easier.’ She goes on to liken 2013’s Loud City Song to singing to an audience, while …Wilderness, she states, feels like singing to one person.

Cole Marsden Greif-Neill is again onboard as producer, and by pushing Holter’s voice way up in the mix the pair not only grace the record the intimacy its songs demand, but in some cases a genuine immediacy, too. ‘Feel You’ is placed at the start of the LP, its opening flourishes of harpsichord quickly augmented by strings, percussion, a nimble bass-line and a straight-up gorgeous vocal, Holter playing with her cadence to mesmerising effect. Images tumble thick and fast, of rainy days and empty rooms and figures that blur into one another in Mexico City, while the concept of escape and “running away” is introduced in its first verse and will figure into the following nine songs. “I’m blinded by the possibility” Holter declares in the spoken-word passage that closes the song, and that idea, too, is reflected by the lovely, sun-splashed instrumentation it is set against.

‘Feel You’ and the equally invigorating ‘Sea Calls Me Home’ have both been paired with sweet, whimsical videos in order to preview the album, but anyone hoping for a full-blown turn into poppier, brighter waters from a singer so often prefixed by the term ‘avant-garde’ might be disappointed. Not that the two songs are misrepresentative of … Wilderness exactly, but the sing-song melodies of ‘Silhouette’ and bouncy lilt of ‘Everytime Boots’ aside, they are by some measure its most instantly gratifying.

‘Lucette Stranded on the Island’ and ‘Betsy on the Roof’ both stretch towards a languorous seven-minute running time. They take longer to sink their claws in, more reminiscent of the freewheeling soundscapes Holter presented on Ekstasis, an album she has noted bears more similarities with this one than the jazzy warmth and unified aims of its immediate predecessor. ‘Lucette…’ is an impressionistic, dream-like tale set on the bluff of an unnamed Balearic island which again closes with a spoken-word segment, Holter reading poetry against the swell of her backing musicians. ‘Betsy…’, meanwhile, has something of the show-tune about it, all strong piano lines that dissolve into a winsome extended coda.

“I awoke pleasing you so slowly…I’m asking you to show me how,” she sings in the opening verse of ‘Night Song’, emitting a kind of pleading, uneasy sensuality and working through some very different emotions from those of the preceding ‘Sea Calls Me Home’. “What did I do to make you feel so bad?” Holter laments as the song turns on its head two-thirds in; “What did I do that you would make me feel so bad?” The plainspoken language coupled with her wounded tone make it an incredibly affecting few minutes, and hint at the theme of obsession she discusses in the FACT interview.

Holter’s songs are grand, cinematic experiences, akin to entering a nebulous, shimmering other-world. They are also suffused with details, whether that be an odd sound or an unexpected image. In ‘Vasquez’, for example, she tells a legend of the Gold Country by zoning in on a few isolated moments, while the production on the closing title track is beautiful. The song wraps up the album with the refrain “Tell me, why do I feel you running away?”

Her style of storytelling is so specific and singular that finding solid narrative threads isn’t easy, but instances of fleeing - allusions to running away - do pervade these tunes. But Holter traverses a huge emotional spectrum on Have You in My Wilderness, and I don’t interpret these instances as anything negative, any more than I do the concept of a ‘wilderness’. Opportunity comes with any fresh start, and that’s what it feels like Holter is setting herself up for here. That’s the beauty of the record, though: each listener should find their own things to contemplate, relate to and enjoy in these thoughtful, ornamental and fantastic songs, and that’s exactly the way it should be.