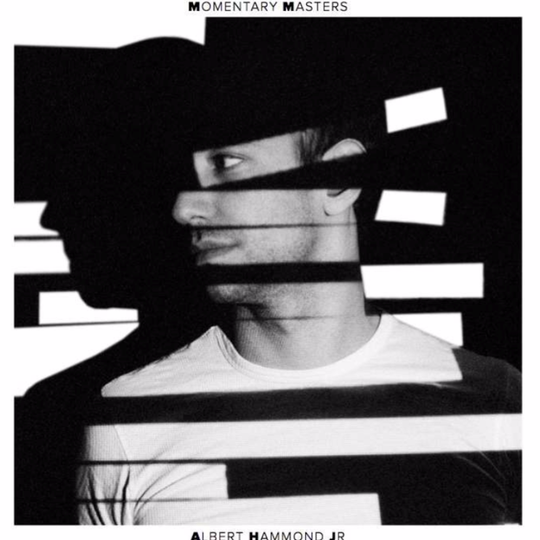 Here’s the deal with solo albums from cogs in quality bands: it seems easy for them to not be so great. A guitarist is supremely prone to setting out on their own and falling into the trap of trying to distance themselves too much from their primary gig, churning out 40 minutes of overly experimental nonsense, seemingly just to prove the inconsequential point that they have multiple skills.

It’s when the artist doesn’t depart from their band’s aesthetic too much that they stand to see the most success, with Death Cab for Cutie’s Ben Gibbard and My Morning Jacket’s Carl Broemel being strong examples from this decade. With Momentary Masters, The Strokes guitarist Albert Hammond Jr. has joined those two as not stumbling, and sometimes soaring, in his side endeavors.

The strength of Hammond’s third solo record lies in its expedience: It clocks in at about 35 minutes and feels more like an EP, not because of quality deficiency, but because of the breezy, non-indulgent pace at which it progresses. But a perceived lack of indulgence doesn’t necessarily mean Hammond didn’t try leaving his comfort zone. In fact, he probably did it so well that we don’t really notice, and Hammond walks forward and away with a confident stride, not the feeble, light-footed steps of an unsure explorer on new soil.

All that said, Momentary Masters doesn’t come across as a lesser Strokes album. If anything, Hammond sounds more like the Arctic Monkeys, who could be considered akin to the UK version of the group, the Ryu to their Ken, if you will. This parallel manifests itself most strongly on frenetically-paced, threatening-to-go-off-the-rails-while-never-doing-so tracks like ‘Razors Edge’ and ‘Drunched in Crumbs.’

More credit to Hammond where it’s due: The guy knows how to pick which album tracks should be singles, as the three cuts he shared before the record’s release are the most dominant of the pack. Album opener ‘Born Slippy’ has a sort of whimsical silliness that is hard to clarify. Maybe it’s how the opening sampled audio about Miss Cleo sets up the wide-smiled happiness of the guitar riff and the jaunty bassline, but the song has a joy-factor that’s off whatever kind of chart this point would be plotted on.

Other single ‘Losing Touch’ is also high-spirited, but in more of a neo-nostalgic way, as the main riff — the entire instrumental, really — is pure ’90s, while the modernly lo-fi, over-compressed chorus vocals and keyboards keep it from sounding like a Gin Blossoms tribute — which, quick aside, may not be the worst thing, as Cursive and Cymbals Eat Guitars proved a few years ago.

Then there’s ‘Side Boob,’ which is undeniably Strokes-y and is also called ‘Side Boob.’

What prevents Momentary Masters from being great is also what makes it charmingly good: its lack of grandness. In fact, trying to be great may have destroyed this album: Every Breaking Bad needs its Keeping Up With the Kardashians.

Hear me out: while watching Walter White’s unexpected rise and demise is intellectually stimulating and fulfilling, seeing Kourtney, Khloé and Kim deal with their #firstworldproblems isn’t a TED talk, but it satisfies a more casual part of the brain that also needs attention.

That might be the most deceptively complimentary way of saying Albert Hammond Jr. has a solid album on his hands, but it is what it is: Momentary Masters isn’t veal, but a damn fine cheeseburger.