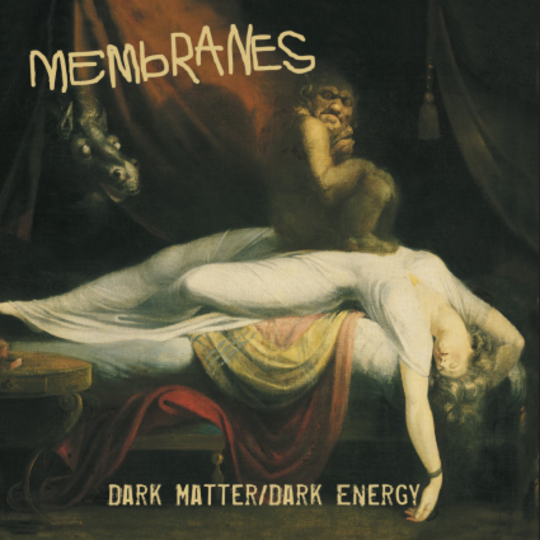 The last time The Membranes put an album out they lived in a different universe: 1989, the Cold War, Thatcher, the shadow of the A-Bomb, poll tax, the fading unions, impending recession, the IRA, the Blonde Ambition tour, Terry fucking Wogan. If ever there was a time to be ragtag, discordant, angry, art-punk odd balls it was the Eighties and The Membranes made sense. Then, of course, the world changed. Frontman and bassist John Robb literally pissed on the Berlin Wall as it crumbled before his eyes. Thatcher out, Major in, Tony Blair, Britpop, Spice World, affluence and internet. Robb formed Goldblade, a band that made sense for those times - a rock n’ roll thrill ride with big hooks, chunky riffs and modest hits, at a time when 'modest hits' actually meant records that sold quite well. Another Universe. And now? A third paradigm. A dimensional shift. The post 9/11 world of Isis and X Factor, of austerity politics and climate change, of drones and Putin and Keith fucking Lemon. Another universe and the Membranes make sense again.

It’s universes that concern the band on Dark Matter/ Dark Energy, their first album since Taylor Swift was born and one of the unexpected treasures of 2015. Inspired by a conversation with Cern scientist Joe Incandela and emotionally charged by the death of Robb’s father during recording, the band have constructed a taut, madly creative, compelling hour of music that manages to be both cerebral and pile-drivingingly uncompromising in its musical and lyrical attack.


This is an album built on two pillars, one of scientific principle and one of emotional uncertainty. On the one hand you have the big, solid concepts: the universe expands and burns, stars are born and stars explode. Physics, entropy, matter... that sort of thing. On the other hand there’s the human stuff: terror, death, aging, breathing, sex. ”I’m an unapologetic, middle aged, fucked up, twenty-first century man” sings Robb on ‘21st Century Man’, rage-raging against the dying of the light, ”my body is creaking but my mind is so alive… I know too much and I feel everything and it disgusts me.” It’s a manifesto for the human side of his record.

The interesting stuff comes when those disparate pillars of science and humanity start to warp each other. Douglas Adams observed that 'the Universe is big. Really big. You just won’t believe how vastly, hugely, mind-bogglingly big it is,' much of Dark Matter/ Dark Energy is a reflection of this, on the chunky, pulsing ‘Money is Dust’, on the post-punk, gothy dub of ‘In the Graveyard’ and a dozen other points we’re reminded of the insignificance of petty human shit against the vastness of the cosmos. More interestingly, though, it works the other way: on ‘The Multiverse Suite’, Incandela delivers a mini-lecture on dark matter and the Higgs-Boson particle, across a phasing, shifting soundscape, he focuses on what the universe is hiding from us- how our perceptions are narrowed and blinded and how our observations affect our existence. On ‘The Universe Explodes Into A Billion Photons of Pure White Light’ (incidentally the best song title of the year) Robb opens the album by declaring he’d “never asked to be born” but finds hope, proclaiming the universe ”so beguiling.” Again and again the tension of humanity and physics push back and forth before you realise the important thing is how each affects the other.

The challenge was always going to be coding such a vastly complicated theme into the music itself- to make it instinctive rather than studious, and The Membranes deliver here as well. Musically this is a beautifully realised work, from ‘The Universe Explodes...’s balance of Robb’s insistent, melodic bassline and dark uncomfortable drones to ‘The Hum of the Universe’s chilly, Joy Division-esq funeral march. There’s a barrage of ideas here that pull the album back from a brooding intensity that could have overpowered it: the gonzoid slashed chords, and machine gun drums that is the very essence of post punk on ‘21st Century Man’, or the mad-as-a-badger rock-out of ‘Do The Supernova’, its warped-rockabilly choruses exploding like the stars of its title. Ignoring the Punk 101 rule book this is an album driven by its rhythm section, allowing guitarist Keith Curtis to scribble and play across the surface. There’s shades of PiL here (with Robb playing the roles of both Wobble and Rotten) and of Joy Division, but there’s a ton more that is uniquely Membranes.

There are a few minor problems: Occasionally Dark Matter/ Dark Energy threatens to collapse under the weight of its concepts; and precious few records can pass the 60 minute mark without testing our stamina- shaving off ten minutes would make this a sharper, more concise attack. That said, in a musical landscape drowning in beige it feels counter-productive to criticise something for containing too many ideas. Many releases this year have struggled with just the one. When ambition is your only criticism, you know you’re probably onto something quite special.