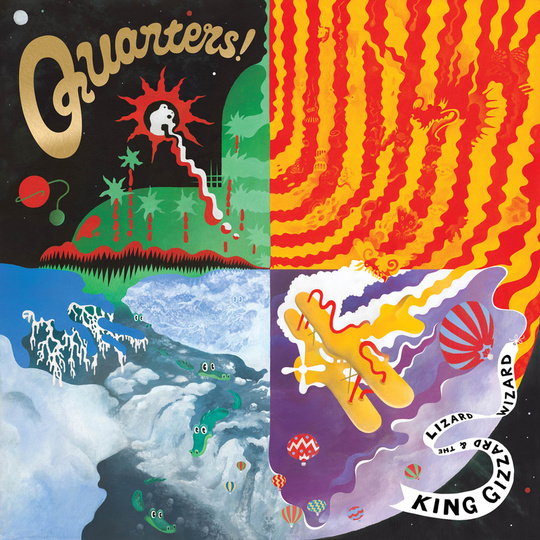 If, like me, you first came upon King Gizzard & The Lizard Wizard thanks to the urgent psych of last year’s I’m In Your Mind Fuzz then you'll surely be delighted with the news that they have quickly followed up that brilliant album with another, Quarters so soon. However, don’t expect this record to follow smoothly on from their previous effort – oh no, this is something entirely different. And all the better it is for it.

King Gizzard & The Lizard Wizard, have, with this album taken a step in a more 'wispy and mellow' direction. Or in other words, the brakes have come off, and the band have decided to fully indulge any tendency that may have only been hinted at recently to let it all hang out, and see what happens. Not only that, but the album – which weighs in at 40 minutes and 40 seconds – is ingeniously, split into four exact quarters of ten minutes and ten seconds (in case you were struggling to know what a quarter of 40 minutes and 40 seconds was).

The album begins with ‘River’, a meandering 5/4 groove of tumbling percussion, noticeably laid back guitars, and a sugar sweet vocal, all leading to a gorgeous Leslie part which is the centrepiece of the song and the album’s first wow moment. Each track here takes its time unfolding, as it has to with such lengths to play with. The mid-section of the song’s increased tempo will get you going if there’s any life left in you. At 8.16, things straighten out into a 4/4, with what sounds like a harmonica signaling a turn into a funky extended outro. I’m hooked.

Quarter two is ‘Infinite Rise’. You might expect that this rises infinitely, as it were, throughout the song. It doesn’t quite happen that way, but the quirky chord progressions and instrumentation of this, another track built around rolling funk, will more than likely ensnare you once again. One of the beauties of this band is that, in the midst of all the musical silliness, there beats a strong pop heart. This is meandering, yet approachable. “Difficult” yet full of hooks and memorable sections.

‘God is in the Rhythm’ is a slower, Fifties-influenced rhythm and blues number. It settles in to a loose, effortless groove early on and never really shifts. Once you’ve hit upon a good groove, why shift from it? Closer 'Lonely Steel Sheet Flyer’ somehow feels like the heaviest thing here. Not perhaps in terms of its volume or any particular use of distortion, but the hold its hypnotic feel can have on your soul is so tight. It feels like it’ll never let you, like a summery, less tribal Goat.

With Quarters King Gizzard they have produced an album which can be analysed to death if need be, but actually works better as something to be consumed as a whole. Each of the tracks here are integral to the record (it’s a good job, being as there are only four of them!), as well as being thoroughly complimentary to each other. King Gizzard & The Lizard Wizard show that there are no limits to the scope of their creative possibilities.