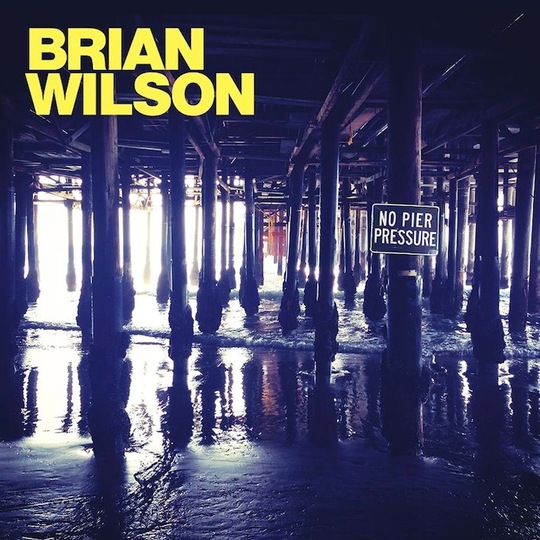 Wouldn't it be nice if Brian Wilson could crack out the good vibrations and get us surfin' in the USA again. It's been too long. Three years since his last record. We were beginning to think that God was the only one who knew when he was gonna write some new tunes.

Now, the above paragraph is clearly extremely clunky and cliché. Two traits it shares with Brian Wilson's eleventh solo record, No Pier Pressure.

The erstwhile chief Beach Boy has always had the knack of being both tuneful and bizarre. His back catalogue is full of brilliant, melodic love songs that, every now and then, miss the mark, resulting in gloriously disturbed ditties that come from a rather dark place.

Unfortunately there's not much of the weirdness on No Pier Pressure, and its a real shame. The sole 'what the hell' moment comes early on with 'The Runaway Dancer', in which Brian tries his hand at Euro disco. Yes, you read that right, Euro disco. As expected the song is pretty awful. It's all thumping four-to-the-floor beats and autotuned vocals. However there's something strangely alluring to the song. It's like Kanye West with a melting barbershop quartet, or something.

From this point the record reveals itself to be much more formulaic than hoped. The Al Jardine-backed 'What Ever Happened' and 'Tell Me Why' could have easily appeared on The Beach Boys' flatter-than-Stanley comeback album That's Why God Made The Radio, and I'm not sure that's really a good thing. Both are floaty and wistful, like theme tunes to fictional Australian soap operas. Vintage Beach Boys this is not.

It's not just Jardine that lends a helping hand. Oh no. The record is peppered with collaborations, leaving you wondering just how much input Brian really had. Zooey Deschanel, Kacey Musgraves and Nate Ruess (me neither) all pop by for a cup of tea and a quick sing song at one point or another.

At first these collaborations add a bit of novelty. Deschanel's turn as a lounge lizard on 'On The Island' is a particularly eccentric moment on a record that otherwise has both feet firmly in the Californian sand. However as the other guest spots roll on in it quickly becomes apparent that Brian Wilson isn't really involved all that much. The only time he makes an appearance on these tracks is during the choruses for a few strained “Ohhs” and “Ahhs”.

This pattern continues right up until the end of the album. By the end of the sickly 'Saturday Night' you'll be wishing back the days of Euro pop Wilson. The track is a painful smile in the form of a country rock song. It's like a Disney film without the light relief or jovial cartoon bears. It's sometimes okay to tone the sincerity down.

No Pier Pressure shows just what too many cooks can do to a Beach Boy's broth. Here's hoping some lessons are learnt for next time. It's time Brian was let off the leash again. The world needs to here some Californian Beach Disco.

Synth pop Surfs Up? Sounds swell to me.