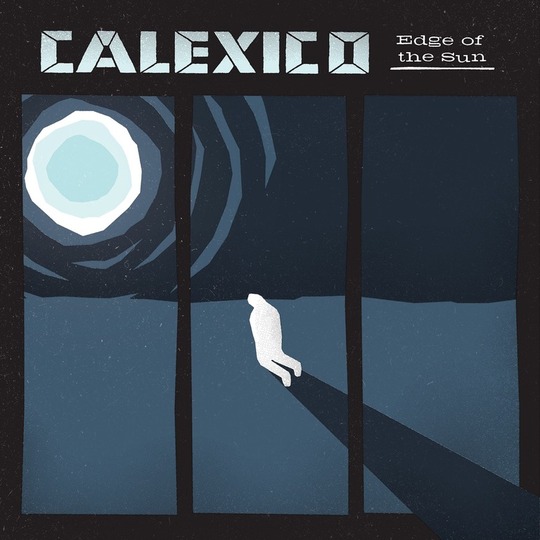 When a band gets so far along in their career, what can you expect from a new album? Calexico have long been an absolutely essential live act, but are now nine studio albums into a career that’s seen them produce numerous good-to-great albums, without ever delivering a classic must-have. To use a very stretched analogy, they’re a lot like a burrito, and not just because they blur the cultural lines between America and Mexico – a Calexico album can often be hearty and satisfying, contain some sublime moments, but overall lack that extra spark to make it truly special.

Is Edge of the Sun the Calexico album to change all that (and save us from any more torturous food-related puns)? Possibly. It’s certainly the best LP they’ve put together in the latter half of their career, benefitting from a richer palette than their most recent offerings, with brushes of electronica and unashamedly big choruses rubbing up against the dusty soundscapes and Mariachi flourishes we’ve come to expect. Time will give more perspective on where it stands alongside other contenders such as The Black Light or Hot Rail, but for now it’s great to be able to sit back and enjoy the atmosphere that Joey Burns and John Convertino can whip up around a group of songs like few others can.

One of the reasons why the band seem to have upped their ante on Edge of the Sun might be the amount of collaboration that’s gone in to it. In between records Calexico can often be found cropping up on other people’s records, and it seems that they’ve called in a few favours here, much to the benefit of the album as a whole. Rather than diluting the power of the band’s central duo or making them seem like side-players, the presence of people such as Neko Case on ‘Tapping On the Line’ and Carla Morrison on ‘Moon Never Rises’ seems to have inspired Burns and Convertino to write some of their tightest, effective melodies, – these tracks and the closing ‘Follow the River’ could have sprung from the mind of Neil Finn if he’d been brought up in New Mexico rather than New Zealand.

The other main reason for the album’s success is a full embrace of that Mexicana that they seem to shied away from on recent studio efforts. The band spent a healthy amount of time in the country writing this LP, and it seems to have given them the confidence to whip out the sparkling brass and Latin rhythms whenever they can – ‘Cumbia de Donde’ is a fun shimmy of a duet, while Coyoacán – named after the area of Mexico City where the band spent time writing – is a sparkling instrumental that’s unashamed of it’s toying with cliché, and all the better for it.

Maybe that’s why Edge of the Sun feels like one of Calexico’s best records – the band sound relaxed about who they are, what they do, and how they work best alongside other people. It’s helped them to write some of their finest tunes – ‘Falling From The Sky’ is one of their most immediate moments yet – and given them a spark that had looked like it was fading. Just when you thought you were sick of those burritos, sometimes it can hit the spot like nothing else.