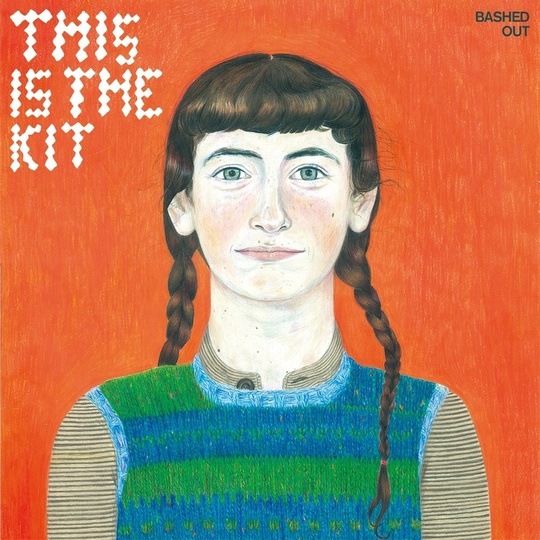 It seems like This is the Kit has been bubbling under the surface for a long time. Since Kate Stables released her second album Wriggle Out The Restless in 2010, she’s steadily gained a succession of notable fans, including Elbow’s Guy Garvey, BBC Radio DJs Lauren Laverne & Huw Stephens (among others), and most importantly, The National’s Aaron Dessner. Dessner’s patronage is the most notable among these names, not only because This is the Kit went on to support The National on tour, but because he would then go on to produce (and perform on) Stables’ latest record, Bashed Out.

It’s fair to say it’s been a fruitful partnership - where This is the Kit previously dabbled with expanding her folk sound on tracks like ‘Sometimes the Sea’ and ‘Spinney’, Dessner’s input sees Bashed Out become a truly widescreen affair. ‘Misunderstanding’ sets the bar for this refined sound - gently reverberating guitar lines, delicate layers of instrumentation and tasteful percussion make for a more measured, world-weary counterpart to Daughter’s youthful anguish. Other changes are afoot too - Stables has made no secret of her love for the banjo, so it may come as a surprise that the divisive instrument only features prominently on one of these ten tracks. But ’Spores all Settling’ demonstrates that her measured and restrained playing is infinitely preferable to any amount of faux-country noodling - indeed, it’s woven so seamlessly into the song’s tapestry that even banjo-haters would have to acknowledge that she turns the instrument into a thing of subtle beauty. You could also use the phrase 'a thing of subtle beauty' to describe Stables’ voice on more or less every song - her singing is neither loud nor showy, and is all the better for it, capable of both soothing tones and quietly arresting clarity.

This penchant for subtlety also extends to her lyrics. ‘Nits’ may begin with an idyllic, endearingly childlike depiction of a sheep-speckled hill full of “happy little fatties,” but deep down it’s actually a quiet dedication to the power of mutual dependancy - “look at us we’re falling down/look we’re standing up again/lucky we were holding hands/lucky little fatties.” ‘We Are In’ is another song with hidden depths, the lyric “today we are the same age,” combining with its its dream-like ambiance to suggest a connection between two long-lost friends that’s both serene and sublime. But there’s also the suggestion that this moment might have come at a cost - “today I missed my wife and kids/today I didn’t do what I just did.” Sometimes Stables just leaves us to draw our own conclusions. The titular ‘Magic Spell’ could be any number of things, but if the song’s swirling synth organ break suggests that whatever it is, it’s truly transcendent. And who are the “duplicitous two” mentioned on ‘All In Cahoots’ - misbehaving children, cheating lovers, corrupt politicians, greedy bankers? They could be any or none of the above, but whoever they are, Stables is wary and disapproving of their actions - “just because they got away with it/doesn’t mean to say that we will too/probably the opposite, in fact.”

There’s a resilience to Bashed Out that seems almost typically British- not least on the title track, which stands bowed but unbroken through hardship and tips its hat to those who suffer quietly with the chorus lyric “Blessed are those who see and are silent.” Then there’s ‘Silver John’, possibly the most gentle and understated song about an apocalypse that you’ll ever hear - “best get used to dark, used to wet,” sings Stables, as if the end of the word were merely an inconvenience to be endured rather than a cataclysmic event. But this sense of resilience doesn’t mean that there’s an absence of desire. Closing track ‘Cold & Got Colder’ demonstrates this perfectly - as the music builds up to a triumphant crescendo, Stables’ voice remains subdued, her final words providing a stark contrast - “Hook line and sinker/I miss it so strongly.” Album standout ‘Vitamins’ is probably the best example, and sums up everything great about this record. There’s a longing for simple pleasures that runs through its delicately picked guitar line, swelling brass and minimal piano - the wholehearted belief that eating your greens, visiting the sea and having a comfortable place to be are the secrets to a happy and fulfilling life. Like everything on Bashed Out, it’s delivered with an understated sincerity that makes it utterly believable - this album ought to see Kate Stables recognised as one of the most compelling voices in alt-folk.