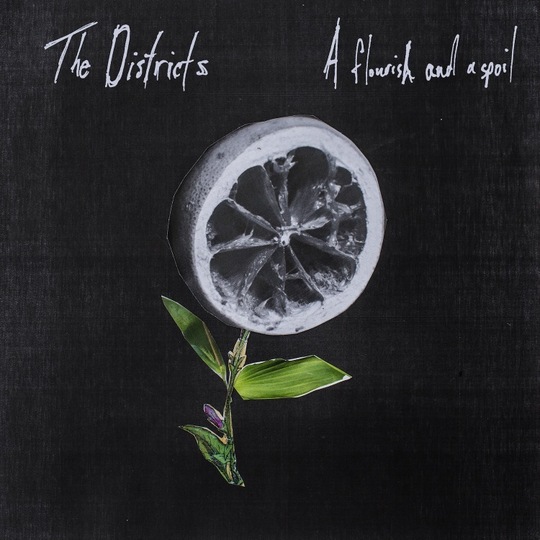 Bar Mark Kozelek and maybe The Village People, most songwriters won't live out their lyrics. No one's got the stamina to fixate on morbid fascinations or thrusting dance moves 24/7. At least that's what we imagine. Times could be troublesome otherwise, especially for The Districts' Rob Grote.

As frontman for the tumultuous Philadelphia four-piece he's one great ball of knotted intensity. Songs seem to unspool out of him in a tidal wave of frustration and regret. It's difficult to imagine a teenager being so upset with the world, but then you can't avoid that thought while listening to his band’s second album: A Flourish and a Spoil. Grote writes to a definitive mood and that mood is 'bleak'. “It’s such a shame nobody’s feeling it now” he opines on the rancorous ‘Chlorine’. Then again, perhaps an overwhelming sense of woe is to be expected from a group who first found Reddit-endorsed fame with their song ‘Funeral Beds’.

The Districts have been a going concern for six years: they formed while still in high school and have dwelled on smalltown distress almost ever since. That’s no surprise since their birthplace of Lititz has a population of just 9,000 people. 'I dunno if you dream of returning home to it, but you definitely dream of leaving it,' explained Grote in an interview with DiS last year. He takes the spotlight to himself on the album’s centerpiece ‘Suburban Smell’, which fixates on the bullying of an intellectually disabled kid by a crowd of rich thugs. The shaggy-haired frontman watches on in disdain while doing nothing to stop the raucous cruelty in front of him.

It’s an affecting breather from the rest of A Flourish… and one that serves to highlight just how feedback-strewn the album is. Every blistered chord on ‘Peaches’ and ‘Hounds’ has been thrusted through a scuzzbox as a matter of principle. As such, the sense of claustrophobia from John Congleton’s production (Modest Mouse, The Walkmen, Cloud Nothings) verges on overwhelming. Mostly that’s a good thing. Album opener ‘4th & Roebling’ and the eight-minute ‘Young Blood’ ratchet right up through your gut, hard enough to leave a mark. You feel as though you're there with the band at rock bottom, swilling arsenic from an ocean of self-loathing.

The record is tonally one-note though, and this doesn’t always play to The Districts' strengths. On ‘6 AM’ Grote’s vocals are needlessly distorted, rendering his anguished howls painfully short of nuance. Likewise, it’s difficult to connect with ‘Sing The Song’ or ‘Hounds’ when they plump the same caustic depths as other tracks with less aplomb. You can only be so low for so long before the slings and arrows of outrageous fortune don't strike true any more.

At worst, A Flourish… is clumsy when aching to be sincere. It wants to be cherished instead of a passing fancy. For every one of the album's fumbled subtleties, there are several moments when The Districts feint at being great. Enough to show they’re flailing in the right direction.