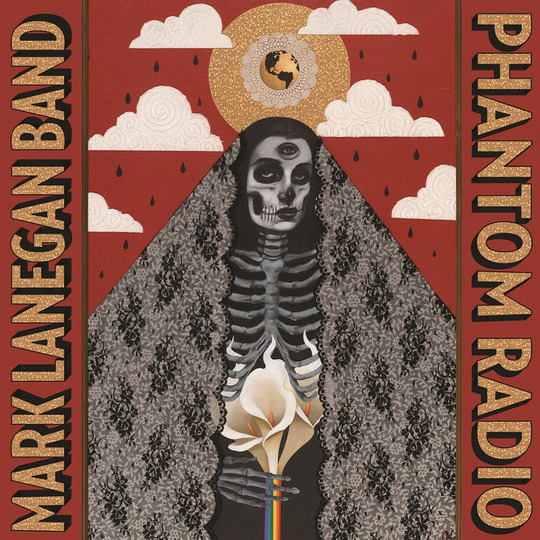 Two years ago Mark Lanegan made something of a surprise return with the release of Blues Funeral - an hour-long titan of a record that moved through gothic rock, synth and grunge with free flowing ease. As Lanegan's first album in eight years, it not only won him a new generation of fans but also ushered in a deserved retrospective of his legendary grunge outfit Screaming Trees. Blues Funeral revealed a more seasoned artist, one whose vocals, lyrics and musical approach had moved beyond the restrictions of a short-sighted era. With his new release Phantom Radio, the subtle synth touches that were so delightful on his previous work return with an altogether gloomier prominence. Speaking of his love for British Eighties post-punk in recent interviews, it seems that he's finally ready to let his true idols mould his new work.

Opener 'Harvest Home' is an immediate throwback to those styles with deep foreground guitar tones and a soaring synth line that fuse to create something elegantly fearful. Sure, his lyrics may be bleak but there's an honest sense of elevation to his cry of being “happy in my harvest home/ walking the floors with the ghosts all alone/ happy that I’m made of stone/ the greed that I cause is my cause to atone”.

Slow burning ballad 'Judgement Time' carries stark similarities to the stunning Blues Funeral cut 'St. Louis Elegy'. Where the latter was an ode to the perils of loss and alcoholism, this is a tragic confessional soaked in biblical imagery and apocalyptic prediction; “In a dream I heard Gabriel's trumpet/ Lord, I was blistered/ just a strung out angel/ I saw the feet of pilgrim's bleeding/ I saw whole cities drowning/ I saw whole armies dying”. It's been clear as far back as The Winding Sheet that Lanegan's real calling card is his ability to articulate emotion with soul tearing anguish. While the Tom Waits' vocal comparisons will likely never go away, it's Lanegan's singular way of forming imagery with words that'll go with him to the grave.

Late cut 'Torn Red Heart' is another humbling confessional that invites the listener into the inner musings of heartbreak. While musically recalling Echo & The Bunnymen's breezier moments, the lyrics are hopeless and forlorn as Lanegan declares love as being “delirium/ it's a childlike dream and then it fades away” before accepting he's “going nowhere/ now I'm going nowhere”. The lead guitar feels like it was stripped straight out of a 'Sound like Joy Division' handbook but such a comparison undermines the emotional resonance of what is arguably one of Lanegan's best ever love songs.

Final track 'Death Trip to Tulsa' is a stomping march to closure with thumping drums giving Lanegan's opening vocal “High/ way up in the sun” some fitting context. It's suitable end to a record that feels largely like a labour of love to a bygone era and while occasionally the reliance on synth feels under-baked (the opening electronics on 'The Killing Season' never sit quite right with the rest of the track), it's hard to deny Phantom Radio as anything other than a patient and poetic career highlight. Fans will certainly be happy with the vocal return but those ambivalent to his grunge leanings in the past will find whole new ground to explore here. This is an impressive record that occasionally tries to cram too many ideas into one place but more than makes up for it in sheer song-writing quality.