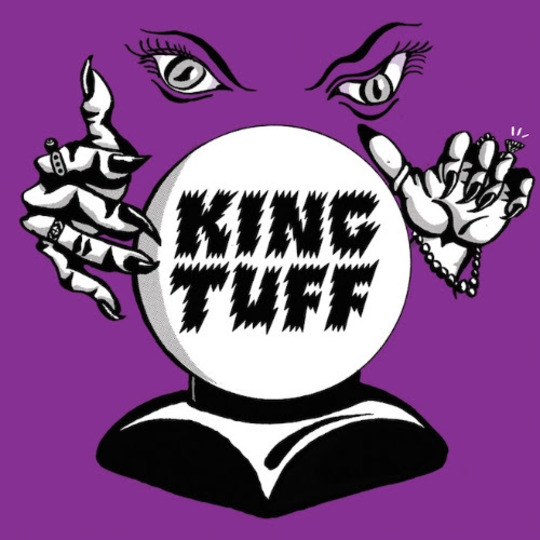 There is nothing we drama whores like more than a touch of madness. The live disintegration of Vanessa Feltz’s sanity on Celebrity Big Brother all those years ago saw a gaggle of reality TV fanatics revel in a cruel stupor that someone was breaking down. In music, any unhinged quality is absolute gold dust for those seeking cult status and myth. King Tuff is a character who has had a cult construct surround him since the release of his debut album. But now on his third record Bad Moon Spell, are there signs that the fourth wall is crumbling?

It is difficult to distinguish between King Tuff and his creator Kyle Thomas; for all his alter ego Tuff’s obnoxiousness, profanity and thirst for drugs, there is clearly a thoughtful and practised writer in Thomas. Is all of this voracious hedonism simply pandering to a sense of rock n’ roll mythology? Or is this character real, tangible and as wild as we hope he is?


Tuff’s first album Was Dead unexpectedly built up a cult status with the very limited release. The collectability of it saw huge inflation on its price on eBay and a bunch of garage weirdos scrambled to get their hands on a copy - King Tuff as we know him was born. His second, eponymous album saw some of the gusto fade and some of the wind taken out of his sails with a handful of slow numbers and a waning in his cult status. Now comes his third effort, Black Moon Spell, which is brimming with rock mythology, crazed guitar playing and stories in which the drugs are better and a tradition of rock legend is continued from his previous outings. This, in a sense, does make everything hang together quite nicely; however, it also teeters on the edge of overkill. Is this slightly mad character being handed to us because it is what we want, or because it is what Thomas wants to project? There is an ambiguity in the answer to that question, but lines like “King Tuff is my name, I got madness in my brain, Pleased to meet you, I’m gonna eat you, Cause I’m batshit insane” do suggest that perhaps this is all getting a little cliché – the puppet’s strings are beginning to show.

That doesn’t take anything away from the album’s actual sound – the ability to produce unashamedly catchy hooks, snarling punk vocals and incinerating guitar work full of solos and T-Rex styled rhythm remains staunchly intact. 'Black Moon Spell', 'Rainbow’s Run', 'Magic Mirror' and 'Radiation' all succeed as relentless garage totems of power without being in thrall to any rock n’ roll cliches. It is in 'Sick Mind', 'Headbanger' and 'Black Holes In Stereo' where things get a little ropier. They are all charged with hyperbole, rock adage and a sense that Tuff may be trying a little too hard to present an image; any subtlety is left completely adrift. On 'Sick Mind' Tuff snarls “She was born with a filthy desire, more sex, more drugs, she could always get higher” over a bed of classic rock guitars. Again, a hook and fantastic guitar playing are present and correct, but the gauche lyrics add a venire of cheapness. 'Headbanger' details a passion between two metal record collectors, it is constructed with rapid finesse, but full of lyrical obviousness. It begins by detailing the connection the two had over each other’s record collection, citing Priest, Sabbath and Iron Maiden before discomfortingly invoking Spinal Tap in saying “My love went to 11”. Although King Tuff is not supposed to be taken seriously, things begins to teeter on repetitivly silly. “Black Holes In Stereo” finishes off the barrage of clichés in a song about a love for vinyl, he sings “Girls and boys come from outer space and so does music too, I learned more workin’ in the record store than I ever did in high school”.

I’m sure for Tuff this is completely legitimate, because one sense you do pull from his work is that music is incredibly important to him. He lives and breathes it like very little people today do, but for all the guitar work, humour, snarling vocals and at times great writing, there is consistently a level of cringyness that goes with it. Maybe we’re too susceptible to it on this side of the Atlantic, but the clichés are unrelenting and point me to the conclusion that Tuff’s mystery, intrigue and cult status are beginning to pale.