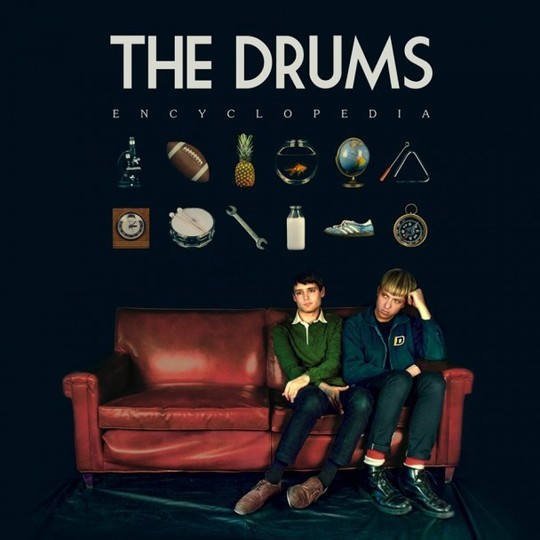 When The Drums’ debut Summertime EP was released in 2009, it was part of a new wave of optimistic US indie-pop that dissipated whatever remained of the post-Libertines rut that the UK had been in. They lead the charge along with The Pains of Being Pure At Heart, Vivian Girls, Crystal Stilts; suddenly it didn’t seem as though Britain would be stuck with The View or The Pigeon Detectives forever. Comparatively exotic, these acts laid the groundwork for what would later become a notable revival in ‘slacker’, ‘twee’ and ‘fey’ indie.

Now everyone thinks that they always listened to The Vaselines or The Pastels, that K Records badge has always been on their rucksack and they’re about to release a split cassette with their mate’s band. Indie (in the genuine, non appropriated sense) is thriving in the UK at the moment, and The Drums et al had a part in cementing that aesthetic and ethos. On third album Encylopedia, however, nothing feels cemented: largely messy in both its individual tracks and as a whole, it is a rather botched attempt at experimentation.

It is no surprise that a band wishes to change direction; unfortunately it is the tracks which lack any hint of the new ‘vision’ that keep the record afloat. Elsewhere ‘Magic Mountain’ is Animal Collective-lite, full of cut-and-paste structures and jittery histrionics; put bluntly, the band are a fish out of water here and the track doesn’t work, with their studio tomfoolery seeming particularly gratuitous. And ‘Let Me’ also takes proceedings too far; the pulsating bass, the dissonant strings and the high-tempo drum work all struggle to find any real purpose. It feels as though whatever efforts to shake things up began on lead single ‘Magic Mountain’ couldn't be followed through- the band's continued attempts at a new angle pop up at random throughout the record, seeming tentative as a result.

The more straightforward tracks are…fine. ‘I Hope That Time Doesn’t Change Him’ has some nice instrumentation and structuring, a mixture of Sixties girl group melodrama and woozy Eighties production. ‘Face of God’ is another example of what the band does well; driven, insistent and catchy, but hardly earth shattering.

It’s a shame really, because The Drums’ attempts at experimentation only heighten the sense that they should stick to what they know, but what they know now seems a bit dated. ‘Wild Geese’ ends the record on a particularly limp note, the lyrics of the ballad missing the mark entirely: “You and me, we’re like the wild geese/ That fly through the thunder, onwards and upwards”. Who knows, perhaps geese do sometimes fly through the noise that lightning makes, but the romance of the simile is lost under the awkward slew of tracks that preceded it. The Drums have had some personnel changes and are possibly re-finding their feet here, but Encyclopedia sees them badly tangled.