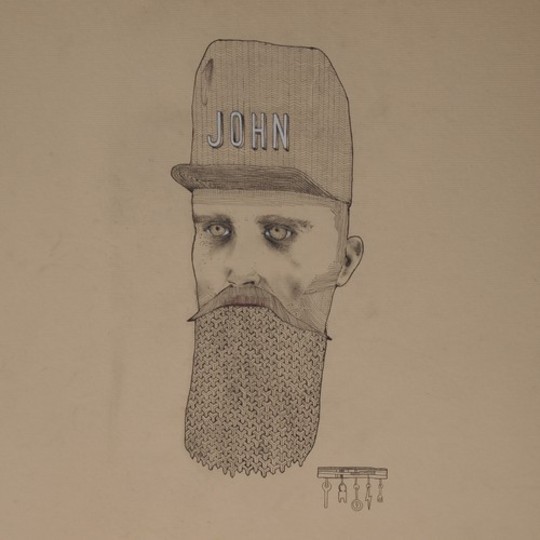 'Different enough to have a reason to exist' may not be the most glowing endorsement of your debut solo album. But Frightened Rabbit's Scott Hutchison has built his name on a self-effacement that borders on self-flagellation. His name may now be Owl John, but he can't fully separate the rabbit from his fears.

The fact that this is a solo record also presents its own problem. When singers step out of a band environment to go alone it's usually accompanied by words like 'personal' and 'intimate.' Lest we forget, this is the man who wrote 'Poke.' Anything more personal could get really, really ugly.

The first sound on Owl John is a guitar, but it's heavily treated and quickly swallowed by drums, electronic flourishes and Hutchison's own voice, cut up and reversed. A piano, again thick with effects, hovers over the opening verse before the guitar fights its way back to the fore. This is 'Cold Creeps,' and it goes through a couple more mutations before the instruments dejectedly shuffle out.

The songs were apparently sequenced according to the order in which they were written, but as the record progresses it's difficult to imagine any other opener being as successful. Every element of the album is in there, burning just below the surface. There's always been a warmth to Hutchison's sadness, and across the remaining nine tracks he imbues that warmth with a gentle experimentation that never fails to excite. Or, as he puts it himself in the accompanying press blah, 'the desperate crunch of failure sat right next to the fizzing, spumante spark of joy.'

That's not to say Hutchison has forgotten how to barb his hooks. With more freedom at his disposal, he accomplishes this in new ways, especially on 'Ten Tons of Silence.' What starts as spacious, sad lament grows gruesome when a buzzing synth drags Hutchison's vocal down to a robotic dirge and his words evoke rigor mortis: “and the stiffening begins / muscle becomes bone / I am fossilised, calcified, the stupor sets in / dumb as a stone / I am wide-eyed, petrified, uncivilised grips / as we suffocate alone and ten tons are lifted... I am fine.” From there, his voice assumes its former pitch and tone as he repeats “I am fine” with such resignation that it's suddenly the saddest thing you've heard all year. As expected from a record conceived and recorded in a short space of time, not everything hits home. 'Red Hand' is pleasant enough, but its instrumental screams ”REM! REM! REM!” so violently that it's impossible to do anything except imagine how it would sound with Michael Stipe's voice over the top. 'Two,' meanwhile, is just too close to Pedestrian Verse to really belong here, despite its excellent spoken-word-and-electronics coda.

Even with these occasional missteps, what's most remarkable about this collection is how good Hutchison's instincts are. Credit must undoubtedly go to FRabbit bandmate Andy Monaghan and Olympic Swimmers' Simon Liddell as producers, but Hutchison has found a way to retain everything that makes him such a compelling artist while deftly sidestepping expectations. Despite being released in weather incongruous to its content, there's so much heart to this record that it simply demands to be absorbed.