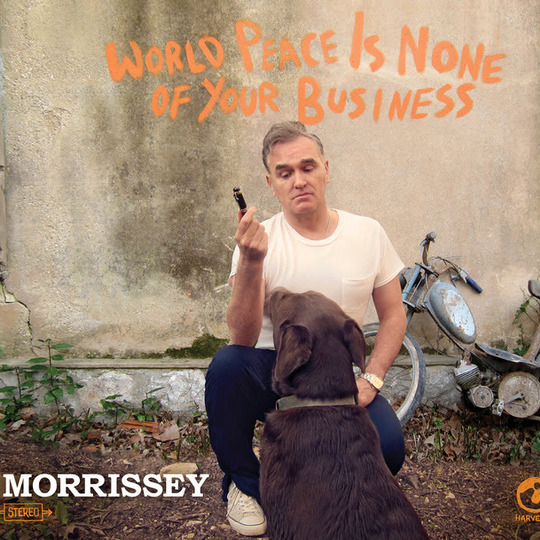 It’s business as usual on planet Morrissey: life is still a pigsty, meat is still murder and the world is still full of crashing bores; guitars still go crunch, falsettos still soar, and the best titles are still the the most disappointing songs (‘Kick The Bride Down the Aisle’ is the new ‘All the Lazy Dykes’) and yet none of this is really a criticism - the great Moz, for all his truculent, rent-a-quote, forever-miserably-misunderstood demeanor is remarkably consistent over a career that now encompasses 10 solo records (plus compilations,) and a book. While there are certainly peaks in that lot there are surprisingly few troughs (Kill Uncle, Maladjusted and the last third of his autobiography being the obvious exceptions). You rarely expect the new one from Steven Patrick to set the world alight, but he knows what his fans want, and World Peace Is None Of Your Business dollops it reliably like the dinner lady in the lunch-line.

It’s been five years since we had a Moz album, and there’s been a record company change and a cabinet reshuffle in the Morrissey band in the meantime. Last time that happened we got You Are the Quarry, now a decade old, his most energetic, crackling work, followed by the elegant Ringleader of the Tormenters two years later. World Peace… doesn’t quite match those, though it comfortably leaps 2009’s Years Of Refusal.

As stated, it’s thematically and lyrically very much on-message; the title track despairs of the world regimes that cannot be trusted (”Each time you vote you support the system” declares the quiffed-one, ignoring that fact that not voting is how we get stuck with UKIP, although maybe - whisper it - Moz wouldn’t mind that much if we did. We’ll leave that there.) ‘The Bullfighter Dies’ is textbook gloating at the death of animal-killers over the jauntiest pop tune on the record, and ‘Staircase At the University’ is a character study in middle-class misery. It’s all so very Morrissey that it can’t help but raise a smile, even when lyrically he’s hardly at his sharpest (“babies with rabies and scabies”, really Moz?)

Musically there’s some attempt to push the envelope a little: there’s an industrial, riffy crunch to ‘Neal Cassedy Drops Dead’ that’s very satisfying, while ‘Earth Is the Loneliest Planet’ floats on a stabby Spanish guitar and strolling basslines that work rather well, at least until said guitar resurfaces for a flamenco solo on ‘Staircase At the University’. ‘Kiss Me A Lot’ also has something of a Latin flavour in its dramatic strums and horn-toots, though in this case used on arguably the most Smiths-esque tune he’s done in years; it’s breezy, quite gorgeous and an obvious single-contender: Moz-pop at its best. It’s followed by its polar opposite, ‘Smiler With Knife’, a sparse and tightly controlled murder ballad that - along with ‘Kiss Me...’ - is the best thing here. There’s more familiar territory too, ‘I’m Not A Man’ is one of those slow-burn intense things Moz throws up every once in a while, here fronted by a thoroughly pointless minute and a half of virtual silence that really adds nothing to a song that would have been just as melodramatic without it, while both ‘Bullfighter...’ and ‘Kiss Me...’ have more that a nod to ‘There Is A Light That Never Goes Out’ about them. Maybe Morrissey, like Johnny Marr on last year's The Messenger is just falling in love with jangle-pop again?

There’s unlikely to be new converts made from World Peace …, and it certainly will do nothing to change previously made up hearts and minds one way or another. It’s not a return to form, because there wasn’t really a departure from it in the first place. It is nothing more, and nothing less than a decent Morrissey album, and for some that is all the recommendation needed.