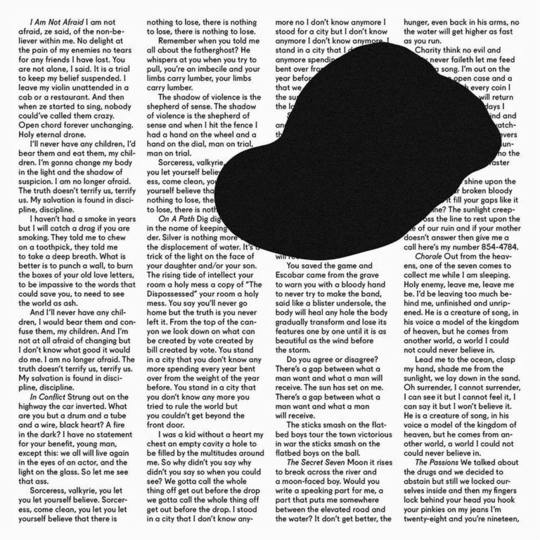 In Conflict is the fourth full length from Canadian multi-instrumentalist and violin maestro Owen Pallett. Starting his solo career in 2005 under the now retired Final Fantasy moniker, Pallett has released a succession of profound and illustriously composed singer-songwriter/baroque pop records that remain completely singular in their sound and appeal, even if he's only tasted commercial success as an arranger for others. His music has long crossed a fine line between pop and contemporary classical but with In Conflict, the former is certainly further to the fore.

Pick up any interview with Pallett this year and you'll find an instinctive push by the interviewer to focus on the relationship between this record's confessional nature and to his formerly fantastical songwriting. That's not to say that In Conflict is his 'time to bare my soul' album, but there is an evident heart-on-sleeve aspect here that hasn't quite come through in the past. Opening track 'I Am Not Afraid', with its heartfelt choral call of “I'll never have any children”, strikes you as a man at odds with his situation, aching for a lifestyle that may never be open to him. Album highlight 'The Passions' is a beautifully subtle departure from much of the record's driving grandiosity; painting a poetic reflection of two lovers in a deeply intimate clash of will: “As we try to get it on in bed/ you've given me your home and head/ You put on The Queen is Dead/ But I just want to talk instead/ Compassion, compassion”.

Musically, the reliance on electric keys and blips make a welcome addition to his musical, ahem, palette (sorry) but the foregrounded strings remain his largest emotive tool. Having been classically trained in violin since age three, Pallett's ability to weave rich, larger-than-life melodies into a traditional pop structure sets his work apart from many of his peers (though Andrew Bird draws close in terms of loop-pedal experimentation). In Conflict may lack an out-and-out violin-based highlight akin to 2006's 'This Lamb Sells Condos' but a more varied musical approach has given In Conflict its own distinct identity.

This is an artist refusing to retread familiar ground and while Heartland certainly experimented with broader instrumentation, In Conflict is the first to contain a track as loud, brash and rock orientated as first single cut 'The Riverbed'. Opening with a thumping drum sequence merged into a tapestry of soaring strings and electric guitar, the song is a rousing triumph that holds close the sound of long time collaborators Arcade Fire (of whom Pallett has contributed much of their string arrangements).

In Conflict is a fine composition free of the fussy baggage that often comes with grand artistic vision. It may lack the fictional cryptic storytelling of Pallett's past work but such elements were merely peripheral to the overall picture - this is art set loose on pop with its teeth bared.