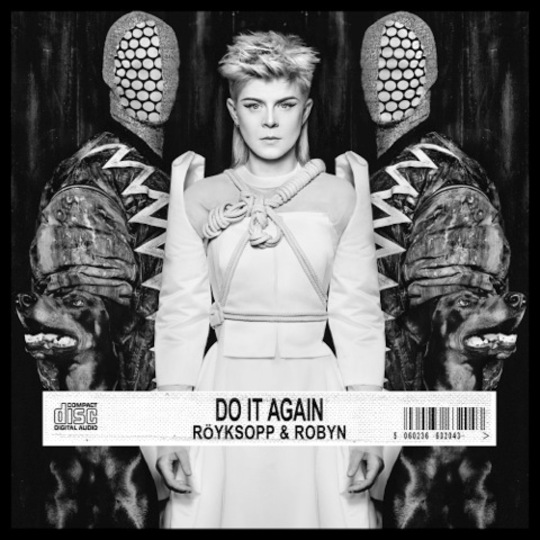 Robyn is quite the enigma, isn’t she? When she is here, she’s absolutely everywhere; the apparently inexhaustible supply of radio-ready singles from Robyn, for instance, or the three-part roll-out of Body Talk. She has a habit, though, of disappearing without warning; we’ve not heard much from her these past four years. But this quickfire five-track effort is an appealing move, a comfortable way to ease herself back into a pop scene that’s continued to shift shape in her absence, yet the fact that it’s a joint effort with Röyksopp means that she’s continuing to push herself into unchartered territory.

Do It Again's opening track 'Monument' serves as a pretty dramatic statement of intent. It clocks in at just shy of ten minutes, and feels so carefully controlled, so deliberately paced, that you can’t help but consider it to represent the sound of Robyn tentatively lowering her toe towards this particular collaboration’s water, rather than jumping in feet first. The backing is pretty minimal - a steady, flickering beat and synthesised bass - and it’s only an incredibly casual saxophone, wandering in at the midpoint, that lends the track any sense of adventure; it very much feels like a standoff, as if Robyn and Röyksopp are trying to get the measure of each other before continuing any further.

‘Sayit’, though, doesn't so much open the floodgates as barge through them; there’s a thick, spiraling synth line that gives way, about half way through, to a deliberate, computerised sound, complete with persistent robotic vocals (“I want you”). They’re male vocals, too, with only flashes of backing from Robyn, which makes you wonder just how much of the track she can claim her own; truthfully, it sounds more like an experimental Röyksopp effort flecked with flashes of a high-profile guest vocalist than anything else.

The title track is the obvious single, as well as the cut that bears the most collaborative fruit. It’s a classic Robyn vocal turn, like of all her best efforts, equal parts sass and anxiety, but the urgency that Röyksopp bring to the boisterous backing really seals the track’s pop credentials, with the exuberant beat following Robyn, rather than dictating the pace to her. It wouldn’t be any kind of Robyn release, either, without a genuinely angsty slow burner. The type of performance that such songs call for - half bold, half vulnerable - demands the delicate emotive balance that she’s more or less made her calling card since Robyn. ‘Every Little Thing’ has Röyksopp come to the fore here and there - there’s a couple of squeaky, almost glitchy, electronic intervals - but for the most part Robyn’s front and centre; she breaks no new lyrical ground, but when she can make cliche sound so unremittingly fresh, she frankly doesn’t need to.

We’re back into instrumental territory for closer ‘Inside the Idle Hour Club’; again, it has you wondering precisely what Robyn’s role was - even if this wasn’t plainly advertised as a shared endeavour, you’d struggle to count the sheer force of Robyn’s character as being any less significant than the gorgeously-melded soundscape that rounds off proceedings; it works smartly as a quiet, reflective mood piece. It begs the question, too, of whether something a little more expansive - a little more epic - might be a sensible choice of direction for Robyn’s next full-length; Do It Again is eccentric and ends too quickly, but those considerations pale next to the fact that within less than half an hour, Robyn and Röyksopp go from eyeing each other with genuine suspicion to sounding as if they’ve never been apart.