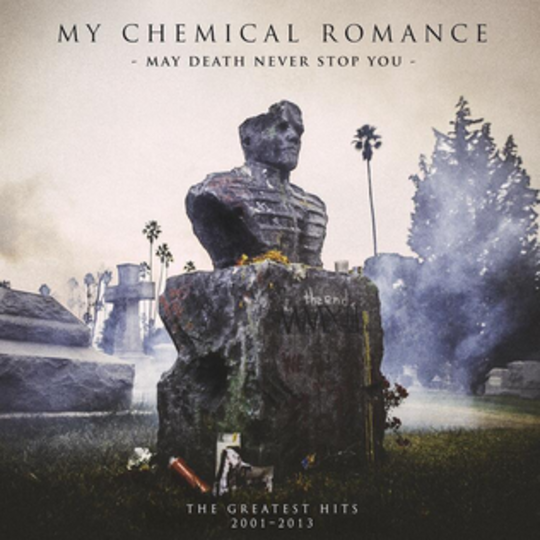 On March 22 2013, My Chemical Romance called time on a beautiful relationship - one which produced four studio albums and spawned an army - in their own heads, a literal army - of fiercely devoted fans. Released a year to the day MCR announced their split (well, one year and two days to be precise, but let’s forgive that small indiscretion), best of compilation May Death Never Stop You sets us out on a smartly chronological last hurrah through the back story of the band, with a new track, some intriguingly juicy demos and a raft of video out-takes thrown in for good measure.

It’s strange somehow to think that My Chemical Romance released their first album more than a decade ago, within months of formation. Though some might try to convince you that the musical world turned and left them in their own little bubble, there is plenty of evidence here to show that the gang were creative pop innovators and diligent rock musicians. And don’t even think about over-familiarity with that ‘e-word’ - patently misused and confused - typecasting the band as trite contributors to a crudely labelled and oft-maligned genre.

Many monumental and still standing highlights along the road are included within this package. ‘Welcome To The Black Parade’ from 2006’s call-to-arms The Black Parade saw Gerard Way and company thrashing headlong into an epic, matured and insightful rock record - swathed in a uniform of hospital gowns and military garb. Hyperactive dance track ‘Planetary (Go)’ and power-ballad ‘Sing’ collectively kicked down the doors of 2010’s dystopian comic book drag-race Danger Days: The True Lives of the Fabulous Killjoys: a record with more than a glint of tongue-in-cheek disenfranchisement with the world at large. Despite the accolades and exposure that the band received in their heyday, in hindsight, it was somehow surprising not to see a stratospheric growth after their Black Parade days. Perhaps ultimately, their output was that little bit too eccentric to lastingly pique the interests of the mass market.

This album runs the same gauntlet as any best of: inevitably any one given will adore 50 per cent of the selections and being various-levels-of-nonplussed about the remainder. While the collection does slightly skew towards the contemporary material, May Death Never Stop You essentially plays out like an evolutionary tree of My Chemical Romance’s sound; from the raucous guttural howl and metronomic drums of 2002’s ‘Honey, This Mirror Isn’t Big Enough For The Two Of Us ’, through the soaring vocals and emphatic emotional rock of ‘Helena’ and riff-strewn lament of ‘Famous Last Words’ and ending up with the blood splattered baseline of ‘Na Na Na (Na Na Na Na Na Na Na Na Na)’. New track ‘Fake Your Death’ is one of the last songs the band worked on together and sounds altogether like a head-on collision with a Nineties indie-rock outfit, all gentle choruses, guitars and lighters held carefree and aloft in the air.

Some bands produce the occasional great concept album, My Chemical Romance arrived as a great concept: a rag-tag gang of chancers with the musical skill and marketing savvy to become one of the most recognizable bands in recent pop history. They made it from garage band to legitimate stadium rock outfit in well under 12 years, all the while proving that pop music is not just about what you play and what you say, but is intrinsically tied to the costumes and theatrics you choose to surround it with.

The periods of debilitating angst that might have originally drawn you into the sonic bosom of My Chemical Romance may have long subsided, but how many of us have lived our formative years without days that could be aptly sound-tracked by the likes of ‘I’m Not Okay (I Promise)’? Their music was loud, quiet, clever, dumb and always shot through with wires of passion. As Gerard Way shouted at the very moment their star reached its ascendancy: “though you’re broken and defeated/your memory will carry on’. For so many fans – myself included – those memories of songs and shows will echo loudly through the years. So long, and thank you for the venom.