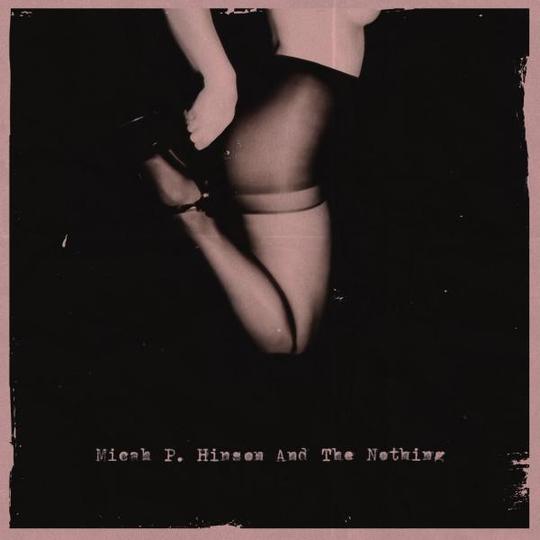 Almost dying in a car accident will change a person. In 2011, Micah P. Hinson was involved in a near fatal crash and the future of his arms hung in the balance. That's horrific for anyone but for a guitarist, you couldn't think of anything more tragic. During the course of recovery, Hinson listened back to the demos he had created before the incident and with the help of The Twilight Sad and T. Nicholas Phelps, he began to mould his previous recordings into what would eventually become Micah P. Hinson and the Nothing.

The title itself is provoking - having previously titled records with 'The Pioneer Saboteurs' and 'The Red Empire Orchestra', and working with an array of local musicians on this particular record, 'Nothing' gives this sense of a pessimistic outlook and of hopelessness. Already, the album seems far more personal than any of his other efforts and opener 'How Are You Just a Dream' erupts into your ears with a vengeance. An almost out-of-tune Hinson is wailing above a mirage of angry guitars that provide a solo that could have come straight out of a Nineties teen sitcom. It's frantic, it's all over the place and it's unpredictable - something that is a million miles away from his previous, somewhat delicate releases.

It's also a million miles away from the rest of the album, as 'On the Way Home (To Abilene)' sees Hinson return to his crooning self, with gorgeous slide guitar and staccato banjo pickings. He has always had a knack for creating an almost atmospheric cage around his songs - transporting you to his Southern world with lyrical imagery and perfected storytelling. This song showcases what Hinson does best and you'll find yourself pressing repeat on this one.

Hinson was unable to use his arms during the recording of the album and the production on this record is noticeably different. His vocals are higher in the mix, making his drawl ever-more present; especially, on the gorgeous stand-out track 'I Ain't Moving'. Accompanied only by a lingering, crisp piano and swelling to fragile strings, it's affecting in a way that film scores so effortlessly capture a moment. Here, Micah is the protagonist and we're welcomed into his darkened new world, as he quietly warbles, "You can push me all you dare but I ain't moving / and you can't please me all you need but I ain't deciding" It's a moment on this record that will forever stop you in your tracks.

His return to melancholic pop shows up on the likes of 'Same Old Shit', with the traditional country elements of a saw and trotting rhythms, Hinson somehow manages to transpose them to another generation without making the genre sound outdated. 'The Life, Living, Death and Dying' continues his familiar storytelling set amongst the sliding country swoops, coaxing you into such a comfort, you'll barely notice that almost five minutes have passed.

While the upbeat offerings are enjoyable, it's the quieter moments where Hinson really excels. He's unable to hide behind the frills of overindulgent accompaniment and we're treated to this wonderful, stripped-back execution. Known for his dry-wit and sarcastic sense of humour at live shows, it's a rare treat to get a sense into what this man is going through - laying it all out on tracks 'The Quill' and 'A Million Lightyears'.

Transforming a painful narrative into songs full of angst, woe and beauty is a craft that Hinson has mastered. Where the album sways towards a mirage of broken vocals and frantic surges, it's quickly juxtaposed by soft and vulnerable contributions, perfectly reflecting the huge range of emotions he would have experienced during his ordeal. Finishing with a bonus, secret track that sees Hinson harmonising with himself through layers of vocal tracks, it's a fitting metaphor to a man full of mystery. At least on Micah P. Hinson and The Nothing we're able to seep through some of the coating.