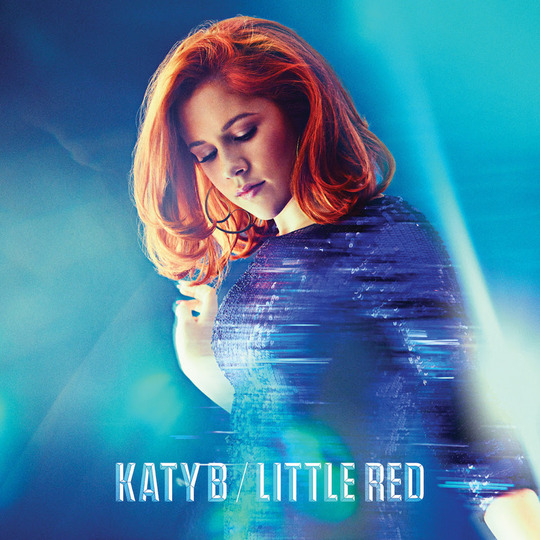 It shouldn’t matter on a dance record, but because Peckham’s tough-girl diva has gone more personal and a bit darker for her second album it has, alas, become an actual problem: Katy B writes some bloody awful lyrics.

Giving her the benefit of the doubt, Little Red, the long-coming follow up to the mercury nominated On A Mission, has songwriting input from classy populist and serial Robbie Williams collaborator Guy Chambers, and we don’t know where his hand was at play. That said, you can’t quite see him churning out “I like champagne but you don’t like the taste/ So I drink yours so it won’t go to waste” on bonus track ‘Blue Eyes’, nor indeed ”My feet won’t stop, I can’t keep still/rock it 'til the morning light/ that beat so sick, that tune so ill” on post-party anthem ‘5am’. But then again, well, that’s the rub, isn’t it? The target market will probably take that line as intended and it will pass without comment, they may even think it’s the coolest lyric on the album... meanwhile it will make some of us feel a million years old. Maybe that’s the point? Is it unfair to judge a party tune for having party lyrics about partying? But then you get to ‘Aaliyah’, a duet with dull-as-dishwater Jessie Ware and a popstep retread of ‘Jolene’. In of itself that’s not a problem (“Aaliyah please don’t take my man/ although you know that you can” confirms the homage) but while Dolly Parton was plaintive and affecting in her humble pleas, Katy Brien’s version just sounds trite - giving 'Jolene' a voice is an interesting idea, but feels like an opportunity wasted due to lack of imagination, “Give me your word that you will free him/ No more games and all your teasing” sings Ware, which barely scans.

The reason we’re niggling here is because, genuinely, it’s the lyrics that are stopping Little Red from being properly brilliant. Like her debut, which was one of those few records that worked as well on the dancefloor as it did on a broadsheet critic’s car stereo, it skirts the edges of untouchable in so many ways: ballsy, danceable, naggingly catchy, musically sophisticated, vocally affecting - it’s on point for fans of On A Mission but introduces subtler shades. ‘Crying for No Reason’ is wonderful, a perfect matching of Brien’s unflashy, properly emotive voice, Tangerine Dream synths and tribal percussion. It’s certainly a better pop ballad than any that have come from team Rihanna. Here Brien’s lyrics are, like Parton’s, plaintive and honest, it makes sense of her aims for the rest of the record.

It’s followed by ‘I Like You’, the other big highlight, a fairly straightforward melody warped out of place by producer Geeneus’s minor key washes, like a 12-inch remix of Sex book-era Madonna. ‘Play’ is, as its title implies, playful, skittish pop, and while ‘Emotions’ tries a bit too hard to tug the heartstrings with hands-in-the-air euphoria it at least feels like there’s something genuine at its core. Katy B is many things, but she’s never fake and while that honesty can backfire with lyrics that sometimes lack spark, the emotional intent behind them is never compromised

The stall is set out nicely on opener ‘Next Thing,’ a bouncy statement of intent where Katy drags us on a whistle stop night out that echos the rest of the album: we skip from the middle of the dance floor, to the post-pub party, to the sobbing hangover, from the passionate kiss to the breaking heart, and every stage feels incredibly real- it’s just a shame that ability to express feeling isn’t often matched by her imagination, “we’ll be on to the next thing” sings Brien, “keep em wanting more”. She’s absolutely right.