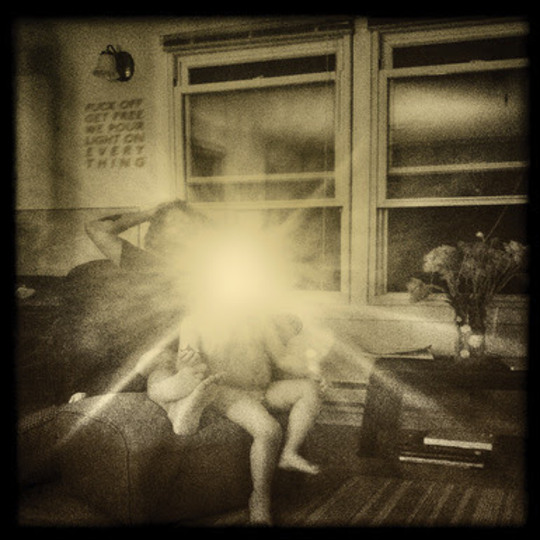 Thee Silver Mt. Zion Memorial Orchestra, they of the ever subtly changing band name, have come a long way from their debut record, A Silver Mt. Zion's 2000 He Has Left Us Alone but Shafts of Light Sometimes Grace the Corner of Our Rooms…. Back then the links with Godspeed You! Black Emperor (with whom the Memorial Orchestra share three members) were as clear as day. Silver Mt. Zion may have always had a slightly sparser musical vocabulary but their early material was unashamedly indebted to the classical post-rock that Godspeed so perfectly define.

Hints of the band as they were then still remain on the abrasively titled Fuck Off Get Free We Pour Light on Everything, but the emphasis is more on their rock side than ever before. Opener ‘Fuck Off Get Free (For the Island of Montreal)’ starts up like an enthusiastic steamroller and proceeds to bound through its ten minute run time, without stopping to give even a cursory glance in the direction of drone interludes and atmospheric guitar figures. It’s restlessly propulsive, driving its point home through blunt guitars and Efrim Menuck’s brittle, yet powerful, vocals. In essence, it is the sound of a band more at home with itself than at any previous point in its discography.

Certainly this is some way from the uncertain, prog-tinted, travails of 2010’s Kollaps Tradixionales, a release on which the band sounded torn between living up musically to their punk rock ethos and honing the visceral widescreen sonics of their early records. The first three tracks here (‘Austerity Blues’ and ‘Take Away These Early Grave Blues’ follow the opener) all see the five musicians thrashing at their instruments with a joyful vigour you would rarely associate with Godspeed or their myriad of clones. It’s refreshing to hear the band cut loose and, crucially, it’s also very enjoyable to listen to. For a record clearly so influenced by the reality of being a musician in an economic climate that treats artists like worthless layabouts, Fuck Off Get Free… is pleasingly chipper in its musical, if not its lyrical, approach.

Things get more somber in the second half. The achingly beautiful ‘Little Ones Run’ is just a short interlude yet it is disarmingly emotive. The gorgeous sound of piano strings being plucked like a harp provides angelic delight alongside plaintive vocals led by violinists Jessica Moss and Sophie Trudeau. Before one can recover the track is followed by ‘What We Loved Was Not Enough’, which is nothing short of a masterpiece. An anthem of colossal proportions, in which the band recapture some of their more widescreen musical personality without sacrificing the identity forged earlier on the album, it’s probably the best thing Silver Mt. Zion have ever done. The fade out vocal line of “And the day’s come when we no longer feel” is almost unfairly perfect.

Closer ‘Rains Thru the Roof at thee Grande Ballroom (For Capital Steez)’ doesn’t attempt to out-epic the previous track. Poignantly dedicated to the talented 19-year-old Brooklyn rapper who killed himself on Christmas Eve 2012, it captures Silver Mt. Zion’s position at a period of time in which they sound more comfortable, and more alive, than ever before. Fans expecting moving, but wearily delivered, post-rock may be disappointed with that position, but it may just have seen Thee Silver Mt. Zion Memorial Orchestra produce a classic. At the very least it is the culmination of a discography that has always been leading to this as its high point.