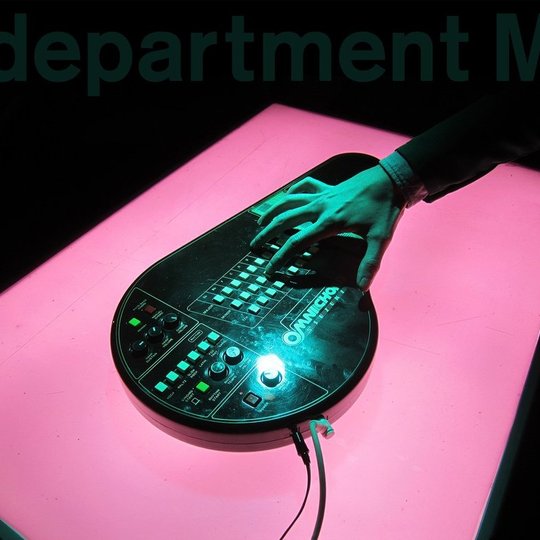 Having had a very significant hand in creating one of the finest debut albums of the past half decade, Owen Brinley was unfairly rewarded by seeing his band implode amid financial turmoil - if the bright red hue of their final t-shirt design wasn’t clue enough, the message 'Grammatics have gone fucking bankrupt' left nothing to the imagination.

When you consider that he was in a band who toured Europe with Placebo prior to that, it might seem like he’s unfortunately destined to be one of indie’s nearly-men. Thankfully, his reinvention as Department M shows that he’s far too resilient to let his talent go to waste. Brinley’s new project (bolstered to a four-piece live band by members of Stalking Horse, Menace Beach and These Monsters) sees him re-invigorated by the decision to drop his guitar and start experimenting with electronic music - but fret not, this self-titled debut mini-album is no clunky attempt at ‘going electro’.

Department M acts as a neat summation of the band’s output so far, collecting their previous singles together and adding four new tracks. The first of these is ’Visions’, which serves as an introduction to the EP, all brooding night-time atmospherics cut with synths exploding with the force of dying stars. Debut single ’pHARMACY’ continues this space-y atmosphere, with Brinley’s distinctive vocal hazily drifting through a dense sonic expanse. By contrast, ’I’ll Fax You an Apology’ is much harder edged, its distorted synths and booming drums delivered as precisely as morse code, while Brinley adopts a tone that perfectly conveys the sense of detachment afforded by his planned means of communication (“I’d fax you my sympathies if I had the means.”) ’The Second Prize’ also fits the same mould, lent a mechanical, almost industrial feel by its methodically arranged synths - but crucially, this affords Brinley’s vocals the space to lend a distinct sense of humanity to proceedings.

Of the new songs, live standout ‘J-Hop’ proves equally engaging upon record. It sounds like someone taking a buzzsaw to a haunted house, its eerie, floating melodies cut through with aggressive synth bass for an irresistibly schizophrenic feel - and that’s before it ambushes you with a possessed-sounding saxophone solo at the end. Its lyrics are equally multi-faceted, with Brinley cooing “For one last time I’ll come to your aid, what do you need?” - barely masking the obsessive nature that’s fully revealed in the song’s mantra-like chorus (“If I could keep you closer…”). ‘Miscellany’, on the other hand, starts with brooding melancholy before doing an about face and adopting a more staccato, sinister atmosphere, as if trying to forget the detritus of the past - ”We erase and rewind.”

‘Absentia’ sees the EP begin to wind down, with the overall sonic palette softening as Brinley sings “I’m breathing out and breathing in,” as if he’s suddenly found serenity in being hyper-aware of his own existence. The dreamy ambiance of ’SleepWalker’ brings things to a close, but as the title might suggest, there’s a restless edge here in the form of Owen’s lyrics, which sound like subconscious thoughts coming to the surface - “There’s no use in keeping things secret/get by however you can, by whatever means.”

A lean and consistently engaging package, Department M is the sound of Owen Brinley revitalised with a crystal-clear vision and a rekindled sense of ambition. He puts it best himself - “I’ve had my fill of this damn second prize.” I wouldn’t want to jinx him, but this record makes me hope he’s on to a real winner this time around.