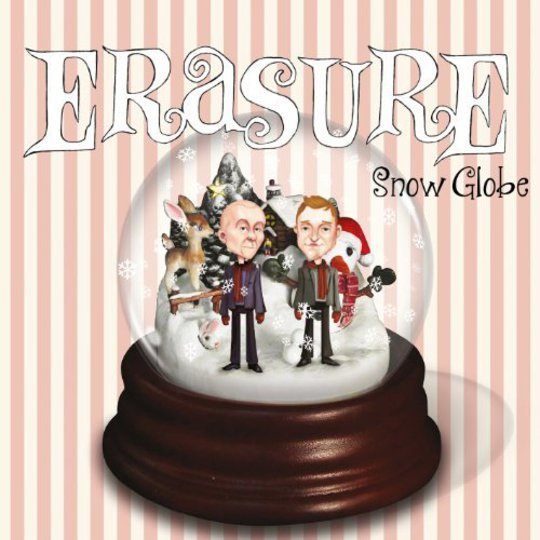 Considering Erasure had their commercial peak back when pop stars wrote actual Christmas songs and had actual hits with them, it’s amazing it took them nearly 30 years to give it a go. In theory it’s a festive match made in heaven: Andy Bell has an innate warmth to his vocals that’s never left him, and because the duo still sound so very Erasureish there’s an instant nostalgic appeal to all of their stuff. A couple of well placed standards, some syrupy originals about presents under the tree, maybe a reworking of one of their vintage hits (‘Ship of Yules’? ‘Paper-Chains of Love’?) and a guaranteed stocking filler would spring forth.

It’s to Bell and partner Vince Clarke’s credit then, that they’ve taken a less obvious and more satisfying route with Snow Globe. We have the usual yuletide mix of classics and newies, but nothing is quite as accessible or as obvious as you’d think. For starters there’s not a sleigh bell in sight, which must be a first for what American readers will know as (shudder) “Holiday Music”. The original songs are fairly subtle in their festive flavourings too; ‘Bells Of Love’ -thankfully not a yuletide reworking of ‘Chains Of Love’- and the brilliant ‘Make It Wonderful’ are reassuringly Erasure-like, but they’re not especially Christmassy; musically they’re actually pretty sinister with Vince Clarke delivering dark, synthy-stabs, leaving Bell to pull them into pop shapes with his soaring voice, incidentally in the best form it’s been for some time. There is a song referencing “following the star” and “these three gifts we bring”, but it’s called ‘Blood on the Snow’, and it’s an oddball, clockwork ballad, hardly the stuff of ‘Merry Christmas Everyone’; but then since the early 70s the best winterval (sic) hits (‘Last Christmas’, ‘Fairytale of New York’) are sadder and darker than you think.

It’s left to the festive standards to smear the brandy butter on the electro plumb pudding, but Bell and Clarke never take the obvious route here. The song choices may be the most predictable possible (‘The Christmas Song’, ‘Silent Night’, ‘White Christmas’, ‘Silver Bells’) but the arrangements are mental. It’s here, when the pressure of authoring their own work is off, that Snow Globe is at its best. ‘Gaudete’ is completely bonkers, a 16th century latin carol reborn as galloping electroclash. Bell’s multi-tracked voice glides into a falsetto as Clarke navigates the odd medieval time signature- It’s cracking. Bell may claim atheism on the albums opening track, but that doesn’t prevent Snow Globe having a fair share of hymns. And why should it? These are melodies that have survived centuries for good reason, ‘Silent Night’ and ‘In The Bleak Midwinter’ are amongst the most beautiful ever written and Andy Bell sings them admirably, though the really interesting stuff is happening beneath him: The more traditional the song, the more Clarke wants to make it sound like christmas with the Cybermen. His arrangements are sparsely electronic, and as instrumentals bear basically no relationship to the familiar hymns. Instead they’re chilly, embryonic electronica.

Though it’s a little early for “chestnuts roasting on an open fire”, and you’ll probably not bother with it for 11-and-a-half months of the year Snow Globe is one of the more palatable additions to the Christmas cannon, and a really good Erasure record to boot. It’s not quite as dark or as bonkers as Kate Bush’s Fifty Words For Snow, but it’s a creative and welcome new soundtrack to the season of good will.

Music has the Right to Children (2013 remaster)