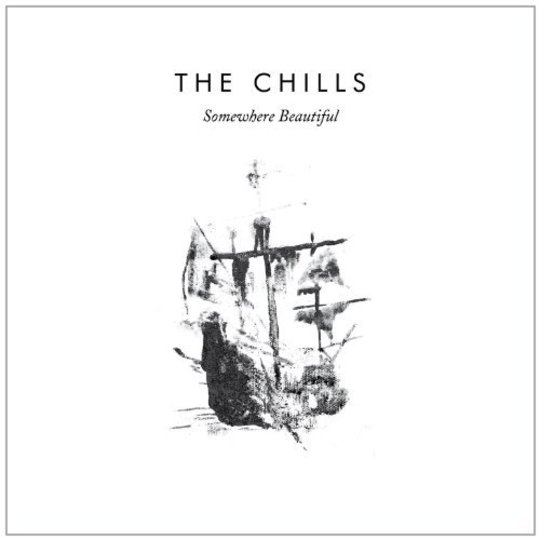 For a band who haven’t released any new material since 2004 (the apparently 'stopgap' EP Stand By) and haven’t issued a full length album proper since 1996, a triple vinyl recorded live at a private New Year’s party and issued in collaboration with artist Shane Cotton may seem a slightly esoteric way to reintroduce New Zealand’s finest pop band to the world.

Yet the erratic prince of the Dunedin sound, Martin Phillips, has never been one for ease of travel when it’s come to The Chills' scattershot career. Comparable only to The Fall in terms of personnel turnover and with a tendency to allow drug issues to trip up musical talent, his, and therefore The Chills’ story is one of early tragedy (in the form of the death of their original drummer Martyn Bull in ’83), homeland successes, international cultdom and, as Phillips so brilliantly depicted on Soft Bomb’s ‘Song For Randy Newman Etc.’ a lifetime’s work doomed to be celebrated more by critics than by the public at large.

Somewhere Beautiful holds 20 songs pieced together from a ramshackle performance from the band’s current line-up (five years and counting - impressive). It’s not of the highest sound quality, nor is it perfectly played – it’s clearly a nicely brushed up bootleg and the band, in the finest Dunedin tradition, play with looseness and feeling rather than precision and directness – yet regardless, it is absolutely, unquestionably wonderful.

When Phillips cries out “I’ve no patience for anyone, anyone, anyone but you”on ‘Wet Blanket’ backed by the most glorious, tin-can guitar sound in the world it’s instantly evident that you’re dealing with a songwriter that understands yearning and desperation almost as well as he grasps melody and instrumentation.

That song’s original 7-inch b-side ‘Nothing Else To Think About’ crops up a few yards down the road and opens the gates wide – frantic, bafflingly tuneful, unerringly gorgeous and weirdly moving it’s like REM in their prime, shorn of Stipe’s veil, emotion openly presented rather than listener inferred.

If you’re after three and a half minutes of unutterable heartbreak (Christ knows what kind of New Year party this was) reach out for this here version of ‘Submarine Bells’. Led by a crushing, how-much-can-you-take piano line, Phillips whispers sonorous poetry like “I can watch in wonder as your gaze shifts past my shoulder / Just a glimpsed abyss that flashes at me”. More? Try the chorus on: “I know deep down hidden in you submarine bells chime / Gold and groaning, sunlit toning, submerged sound sublime.” It’s a mid-album moment of reflection that ranks with all-time showstoppers like John Cale’s ‘Dying On The Vine’ or The Go-Betweens’ ‘The Wrong Road’.

The 1992 nearly-hit ‘The Male Monster From The Id’ thrashes wildly and tunefully, a rampage of self-deprecation and frustration, next to the band’s iconic ‘Pink Frost’, its ‘Love Buzz’-like bass riff as rousing as it was in 1984, its woodsy, almost gothic pop sensibility as unsettling as it gets – a murder ballad slathered in regret, tarted up with tune.

‘February’ offers the rackety, rickety kind of pop that Darren Hayman used to belt out in his Hefner days – all smart, sweet and damaged. The choice to throw in a cover of Cat Stevens’ ‘Matthew And Son’ that could best and most generously be described as ‘energetic’ is perhaps the only mis-step on the whole record.

In the last quarter we get the majestic double of ‘Heavenly Pop Hit’ and ‘I Love My Leather Jacket’. The former is as jaw-dropping as it was the first time you heard it and will leave you with the same sense of wonder, joy and confusion at just how it’s possible to write a piece of pop music as perfect as this. The latter absolutely thunders – a roaring, garage-glam stomp that pays tribute to the aforementioned Bull.

Let’s not overlook the glorious packaging and prints involved in the vinyl version of this release – they are genuinely impressive and great care has clearly been taken to present the album as a document of great import both to the band and to Shane Cotton. You’ll lose no points here for trying to give your fans something special.

In the final assessment what we’ve got here are a set of pop songs that are almost uniformly brilliant, captured in a fashion that harks back to the band’s beginnings, presented beautifully and with pride. If The Chills never do get around to releasing that new album, Phillips never does get recognized as the master of melody that he is, the world never does collectively stand up and realize this band’s greatness – at least there’ll be this to play out endlessly, marvelling, eyes fixed on the stereo as another tune rises, thinking wordlessly – how the fuck does he do that?