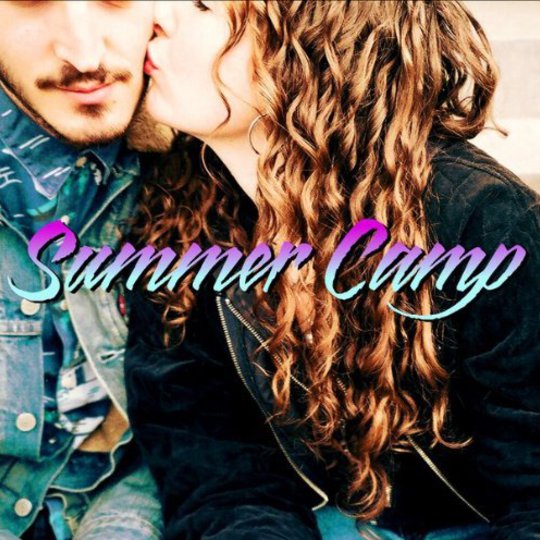 Summer Camp have always had an interesting relationship with artifice and sincerity. Back when the woozy, effortlessly charming ‘Ghost Town’ swam around the blogs in 2010, the duo created a narrative of anonymity for themselves, spreading false rumours about the band being a bunch of kids who met at... (take a guess). Stepping from behind the MySpace stock images to reveal themselves as Elizabeth Sankey and Jeremy Warmsley, Summer Camp’s first full length was called Welcome to Condale – a fictional place populated by fictional characters.

Summer Camp – the assertively self-titled follow up LP, in itself demonstrating a new bit of nakedess – strips back more layers of masquerade, and stands as the band's closest yet approximation to performing unashamedly as ‘themselves’. Earlier material didn’t just evoke the chewed up cassette aesthetic, but wholeheartedly inhabited it: Sankey playing the part of the pining girlfriend and out of place teenager without the slightest hint of an ironic wink. And while these songs still drink from the fountain of nostalgia, they’re more self-aware of their relationship to the past, and frequently sound comfortable in being exactly what they are: songs sung from the perspective of fully grown adults, reflecting on their own lives.

At its best we’re offered shimmering gems like ‘Fresh’ – perhaps the finest song Summer Camp have ever released. With the rhythm section and guitar swaggering across the top of a perfectly rendered string sample, Sankey’s vocal line dances through a maze of crisp hooks to rapturous effect. As is typical, the subject matter is of teenage love – but for the first time, it’s told through the bittersweet prism of retrospect, providing a deeper emotional sincerity than we’ve yet heard from Summer Camp, and here they wear it handsomely indeed.

And while the album at large maintains the lusciously rich production levels (a marked improvement over their prior LP, which was a stodgy and undercooked thing) there are frequent moments where a self-conscious attempts to inject ‘maturity’ into the song writing undercuts their former charms. Lines like “when we used to fight, she said, it was for something, not against each other” in the overblown melodrama of piano-and-vocal piece ‘Fighters’ stick out as badly wrought attempts at writing about An Adult Relationship. And with the arrival of these ambitions towards deeper artistic maturity, the hooks undoubtedly suffer, and Summer Camp feel like they slightly overstretch their abilities.

To be sure, songs like ‘Everything Has Changed’ – and the doozy of a lead single – recapture the carefree, loose catchiness of the band’s best work, but these moments are a sad rarity on an LP that simultaneously feels overcooked and underdeveloped. Almost always, a move towards sincerity and maturity is to be applauded in a band, but with Summer Camp, it’s a move away from proven strengths. The evolution of structure and texture in songs like ‘The End’ is certainly admirable, but not yet satisfying – and, sadly, far too many of these songs are drained of the charm provided by the sense of artifice which ironically made their early songs feel all the more sincere.