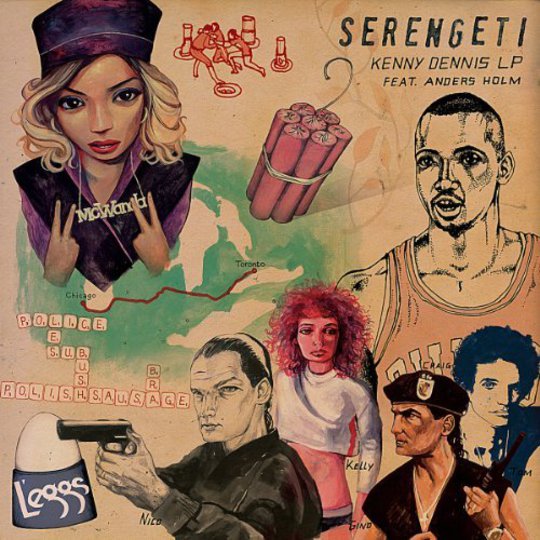 What do a former coach of the Chicago Bears, American Gladiators, hot toddy, non-alcoholic beer and Burn Notice Season 3 all have in common? If your answer is Serengeti’s character creation Kenny Dennis, then you're on the right track.

If that wasn't your first thought, then here’s some backstory for the uninitiated. Kenny Dennis, (AKA:KDz, AKA:The Deacon) is a white, fifty-something Chicagoan rapper with a Ron Swanson-esque moustache and a love of sports trivia. He found short-lived fame as one half of early Nineties rap duo Tha Grimm Teachaz, but their debut There’s a Situation on The Homefront flopped and they were unceremoniously dropped from their label. After which he went underground, resurfacing briefly in 2006 with cult hit 'Dennehy' and again last year for an EP, which drew inspiration from obscure Chicago-centric references, the cinema of Tom Berenger and a deep resentment of Shaquille O’Neal.

Much like his previous outings the Kenny Dennis LP doesn't slow down for the listener, fully immersing you in its world from the off, demanding you run to catch-up with the surreal and esoteric universe of our hero. By way of an anchor point there are a series of skits which punctuate the album, telling of a friendship between the rapper and a young fan. When they first meet in a department store, the boy longs for a toy he can't afford, until benevolence shines upon him in the form of Dennis, who uses unwanted in-store credit, not to buy him the toy, but rather a shower radio. He claims the boy would do better to own ”a good piece of merchandise”... this logic is the essence of Kenny Dennis.

Out of context, this might sound confounding, even crazy, but really it's all a rather clever conceit. A rich backstory that has been built gradually over time by David Cohn (AKA Serengeti), a fiction layered on a fiction, interwoven with leftfield references. Of course, if you're only familiar with the the indelible melancholia of David Cohn’s regular solo output, you may find this whole concept a little surprising. While he and his alter ego certainly share the same loose conversational flow, his normally bleak subject matter is jettisoned here, in favour of Dennis’ sage, albeit sometimes deeply convoluted, advice.

His delivery is gruff; half mumbled rhymes flowing steadily over the note-perfect vintage, boom-bap production, his true meaning often obfuscated on first listen. “Bang Em” starts out based around a one-note pun; “You like em, you bang em/Sometimes you don't like em but you still bang em”. But makes a jarring turn into strobing industrial synths and angry shouts two-thirds of the way through, as Dennis realises his true meaning, (“bang em” as metaphor for doing something worthwhile with your life) might be getting lost in a haze of sordid innuendo.

Obsession over minutiae and a search for clarity are the hooks which Serengeti uses to draw you deeper into Dennis’ world. On 'Crush Em' he lists the differences between the great historic innovations of the English vs the Americans (boxing and economy vs beef and comedy). Culminating in a surreal stream of consciousness, where characters from Steven Segal movies, Kelly Le Brock and retired Chicago Bulls shooting guard Craig Hodges all share breakfast together. Similarly, 'Directions' begins in a typical, braggadocious rap style, albeit bizarrely about the speed at which Dennis can run a mile (4.14 for those counting). He turns this into advice about taking ‘direction’ in your life and builds to a fervent OCD flecked crescendo, “You go left, you go left you go left, you go right, you go right, you go up, you go down”, he repeatedly exclaims, striving for candor as he (quite literally) dispenses directions over oscillating synths and vinyl crackle.

The album’s standout is 'Kenny and Jueles', a heartwarming love story about Dennis and his wife, which already finds itself in unusual territory as a hip-hop track about the benefits of a committed relationship. It layerss and expands on a simple but bizarre idea, that Kenny won the American Gladiator Powerball but returned home to silent ambivalence. Initially, he takes his wife's silence as a slight “When I crushed Nitro into the wall in Powerball, she didn't say nothing nice”, but the track builds around the mundanity of their everyday life, evolving into a heartwarming articulation of loyalty, compromise and the cost of long-term love and devotion and sacrifice”.

The Kenny Dennis LP is an intriguing piece of character led alt-hip hop. It will baffle some, but if you stick with it the reward for your patience is Serengeti’s keenly observed portrayal of an enigmatic, idiosyncratic and ultimately charming character. Much like that gift of a shower radio it's not always straightforward, but will surprise you with something that you may not expect, and provide you with something that you didn't know you needed; “a good piece of merchandise".