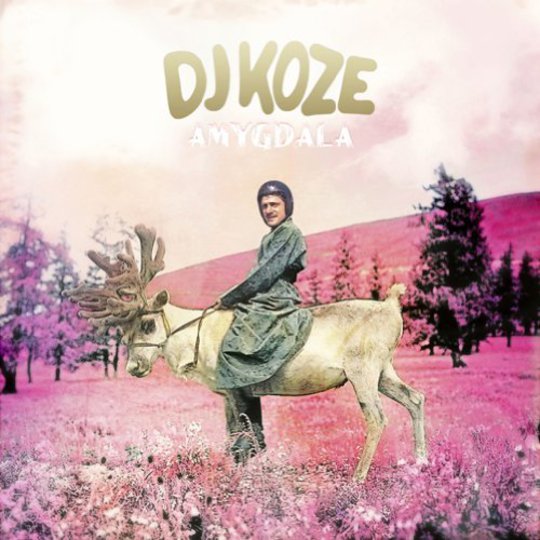 It has been a long wait for a follow up to 2005’s Kosi Comes Around, Stefan Kozella’s first proper release in album format. Touted as his Sgt. Pepper’s, Amygdala is, as you would expect after eight years, an entirely different creature from its predecessor. Whereas Kosi Comes Around’s ‘Don’t Feed the Cat’ and ‘Brutalga Square’ resided in the realm of dancefloor-threatening techno, Amygdala has left the club, queued for a minicab, piled indoors, switched on the mood lighting and begun the slow but steady spiral into the morning after the night before.

The album begins with the first of eight collaborations, ‘Track ID Anyone?’ featuring Caribou, announces its arrival with two voices declaring “the pills should be kicking in right about now” before an authoritative female voice declares “we need to eat, we need to sleep and we NEED music”, at which point the unmistakable touch of Dan Snaith emerges amidst a droney melody. By the time ‘Nices Wolkchen’ featuring Apparat kicks in, the upbeat pop of the previous track fades into almost threatening melancholy. With vocals provided by such well-known and distinctive contributors, Amygdala begins with a great deal of familiarity and it is almost without noticing that you are drawn into the album proper with ‘Royal Asscher Cut’.

This third track perfectly demonstrates the traits in which the album as a whole holds in abundance, in the main its ability to absorb and drift over you completely. Much of Amygdala seems to exist just out of focus - as soon as you try to concentrate on a track your mind slips and it is not until said track ends that you find it has been wandering. It possesses the idiosyncrasy which comes hand in hand with anything Koze produces, and with it the ability to shape-shift and be two things at once. The first of Matthew Dear’s contributions, ‘Magical Boy’, is woozy, funky and mechanically driven, moving your body whilst your head nods off. Dear’s vocals in both songs mirror the pervading mood and its after-party feel, being both introspective and in typical Koze fashion, rather silly. In ‘Magical Boy’ he sings “when I’m climbing lemon trees of feeling/time on my hands when I’m running out of faith/there’s a fire when I am falling out of place/years of soaring wisdom slap me in the face”, whilst in ‘My Plans’ he asks “why do my plans always change/and why does this make me laugh/when I notice the world is falling apart/I will run a bath”.

Whilst the overall feel of the records remains throughout, the collage of genres constantly changes, as if different friends keep taking control of the stereo, flitting back between Kozella’s present and his past. ‘My Plans’ and Kings of Convenience cover ‘Homesick’ bear the hip hop tinge of Koze’s early years, with the former in particular covered by the ghostly finger-prints of J Dilla, whilst ‘Marilyn Whirlwind’ looks back more recently to Kose Comes Around with a diaphragm-busting lashing of bass. ‘Ich Schrieb' Dir Ein Buch 2013’, the second to last track meanwhile signals the arrival of sunrise, wedding vocals from Hildegard Knef’s 1975 track of the same name with a House beat and a massively distorted ‘Aint no Mountain High Enough’.

Amygdala is a thoroughly immersive album, possessing so many layers that it seems to change upon each listen. It is perhaps closer to a Back to Mine imprint than a Sgt. Peppers, but goes further as it is not only the perfect soundtrack to a post-club morning, but almost is one in itself.