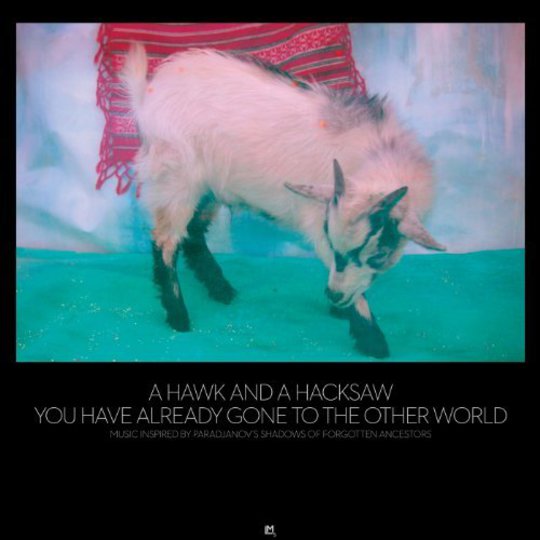 Let’s not forget, band-founder Jeremy Barnes was the drummer in most people’s go-to cult indie band, Neutral Milk Hotel. He started A Hawk And A Hacksaw in 2001, inviting violinist Heather Trost to play with him in 2005, and as well as making their own music they played with Zach Condon’s Beirut – every indie kid’s go-to Balkan pop group – on his first album Gulag Orkestar. So when we say that A Hawk And A Hacksaw make Eastern European folk music for people who don’t like Eastern European folk music, it’s not because they don’t do it properly. Rather, it’s because their fanbase is made up more of indie kids than it is of continental folk connoisseurs: you only really get into A Hawk and a Hacksaw because you like Neutral Milk Hotel and Beirut.

For Americans though, Barnes and Trost make their music with an unfathomable authenticity. If Gogol Bordello are the Goldie Lookin’ Chain of Eastern European folk, A Hawk and a Hacksaw are its Public Enemy, and You Have Already Gone To the Other Wold is their most legitimate love-letter to the region’s music yet. Years from now, it could well be looked back on as their masterpiece.

The album is adapted from the Barnes and Trost’s soundtrack to Shadows Of Forgotten Ancestors, a 1964 film by Ukranian director Sergey Paradjanov, which they toured last year. Stripped of the film’s strangely rustic psychedelia, the music becomes its own motion picture; it is cinematic, but so much more on top. In an hour of dense arrangements – some traditional, some specially composed – there are scenes being set (‘Open it, Rose’, ‘Hora pa Bataei’), exhilarating action sequences (‘Witch’s Theme’), moments of delirious joy (‘Dance Melodies from Bihor County’), sombre reflections (‘Wedding Theme’, ‘Nyisd ki Rózsám’), agonising suspense (‘Where No Horse Neighs, and No Crow Flies’), untimely tragedy (‘The Snow in Kryvorivnya’, ‘O Lord, Saint George, Bewitch Ivan, Make Him Mine’), a final showdown (‘Ivan and Marichka/The Sorcerer’) and, ultimately, a sense of resolution (‘On the River Cheremosh’).

That all of this is articulated with barely a word of vocals or dialogue – what little there is certainly isn’t in English – is the sign of what a great soundtrack A Hawk And A Hacksaw have made. What makes You Have Already Gone… a great album, however, its piercingly evocative power, telling a story built on love, caught in a tussle with death and glory, shrouded in ritual and tradition. Barnes and Trost capture a cultural life that can seem remote, to convey much about life itself.

The playing is astounding throughout, with Barnes and Trost turning a dizzying assemblage of strange instruments into a strikingly cohesive whole. Trost’s skills on the violin are particularly astonishing, not least on ‘Hora pa Bataei’, which thrashes around excitedly, like a shark under attack from a swarm of wasps. ‘Witch’s Theme’, likewise, is like listening to two different Battles songs while you’re on the best Balkan holiday ever. The emotional punches are packed in too – ‘O Lord, Saint George…’ has a deathly sadness, ‘Marikam, Marikam’ is like being haunted by your own purgatory and if you aren’t left devastated by ‘Bury Me In The Clothes I Was Married In...’, basically, you’re doing it wrong.

Coming at it from a Western perspective, it’s tempting to consider whether A Hawk And A Hacksaw have made their Loveless, Nevermind or, if you like, their In The Aeroplane Over the Sea. But aside from the lack of respect for the cultural traditions of Eastern European folk music that shows, it’s also unlikely this record will end up in anywhere near as many teenagers’ bedrooms. That doesn’t make You Have Already Gone… any less brilliant though, and listening to it, it’s easy to picture it as the ground-breaking gateway album it deserves to be – the one that will inspire Neutral Milk Hotel and Beirut fans to immerse themselves in the culture of an underappreciated region.