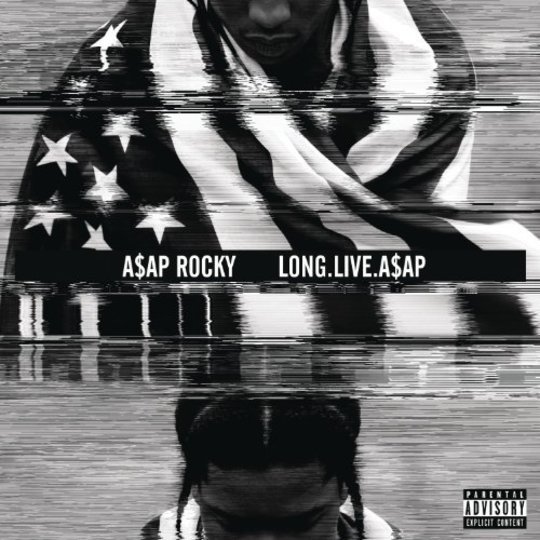 "That pretty motherfucker" is how A$AP Rocky chose to distinguish himself on his debut mixtape LiveLoveA$AP, bursting into the public eye in 2011 with mob in tow. A harmless enough adlib in itself, of course, but Rocky’s biggest struggle ever since has been to prove that he’s anything more than just a pretty face. It’s not like he hasn’t been given the opportunities; the unwavering attention of the press, his pick of beats from some of the most seductive producers around, and a cushty major label contract reportedly worth $3 million. Yet despite all of this, LongLiveA$AP is a hollow, characterless listen from a young artist who I can still tell you next to nothing about.

Very few rappers possess all-round talent, but even those with limited resources can shine on raw energy alone, or using humour, storytelling, honesty, insightfulness or mystique. A$AP Rocky demonstrates none of these things; he’s a salesman of swag who smothers his product in trendy gloss, only for it to wear off after a few listens. Even the tracklist here reads like a hit-baiting hip-hop blog desperate to cover every angle of the popular rap universe – featuring Drake, Kendrick, Gunplay, Action Bronson, Santigold – all the boxes ticked, but with no regard for how they play into Rocky’s own identity.

Having said that, LongLiveA$AP is much the same proposition as the preceding LiveLoveA$AP, filled with the kind of now-ubiquitous sonics popularized by Clams Casino. Clams has two elegant, shimmering contributions here, joining a list of similar beatmakers and polished imitations from the likes of Hit Boy and Dangermouse. Rocky flows with variation and ease, and while he might have nothing to say – and I mean nothing - when the beats are captivating enough by themselves his voice essentially serves as hype man for what’s going on around him. As a result, the most successful songs here are those with the least pretension, the one-dimensional club singles ‘Fuckin Problems’ and ‘Goldie’; songs that were hits before A$AP even entered the booth.

The problem with the kind of emotive, mournful production that dominates the rest of the album is that Rocky is unwilling to meet it halfway. Songs like ‘LVL’ and ‘Phoenix’ are heavy in tone, and while the likes of Main Attrakionz have a knack for using that sound to evoke sadness or aspiration, A$AP’s vapid self-prophesizing just sounds faintly ridiculous. On ‘Ghetto Symphany’, Rocky raps, “Outkast my whole life; so I decide to spit like Andre”: But the difference between A$AP and Andre (or at least the most significant one) is that ‘Dre is one of the genre’s innovators, while Rocky plays it consistently safe and hip. The young Harlem emcee would do well to take his hero’s advice, and take off his cool.

The only obvious risk here is the Skrillex collaboration on ‘Wild for the Night’, but its airhorn synths and cod reggae intro fail to get the pulse racing. The event rap of ‘1 Train’ also fails to live up to its billing, as a bunch of good-to-great emcees deliver passable verses over nuts and bolts boom bap. What’s worse about ‘1 Train’ is it surrounds Rocky with larger-than-life personalities, only serving to accentuate his lack of identity next to the likes of Danny Brown, Action Bronson and a revitalized Big K.R.I.T. Whether you like those artists or not is by-the-by, at least their characters are defined enough to provoke an opinion. Meanwhile, A$AP Rocky is using a stellar Friendzone beat to rap about his favourite brands brands brands - like Taio Cruz, but with artistic pretensions.

A little shallowness is fine by me, but Rocky’s studied, humourless delivery is harder to swallow. The initial appeals of his first release have since found other vessels, more intriguing voices looking to advance rather than consolidate the screwed Houston sound found on LiveLoveA$AP. That's unlikely to stop A$AP becoming a star, just as its unlikely stop a legion of fans repeating his empty mantras. A strong aesthetic counts for a lot in the business of music, and LongLiveA$AP is as carefully stylised an album as you’ll hear all year. Long live A$AP indeed then, but let’s not create any false illusions of Rocky’s significance.