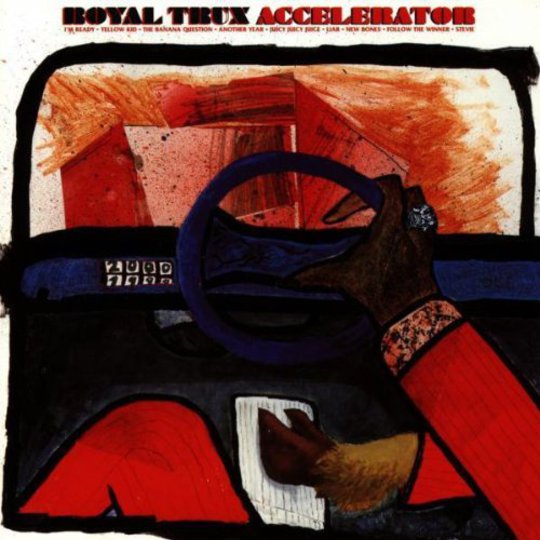 Accelerator was first released in 1998 – Neil Hagerty and Jennifer Herrema’s seventh album, as it then stood – which afforded it that crucial arm’s-length perspective from which to squint at, chew over and ultimately batter the fizzing electro-piss out of the FX-bloated production clusterfuck that formed much of what had apologetically passed for ‘rock’ in the Eighties.

And thus, as the third and final panel in a curious sonic triptych – Thank You and Sweet Sixteen before it had each cocked similarly abstruse, semi-affectionate snooks at the aesthetic flourishes of the Sixties and Seventies respectively – Accelerator had its work relatively clearly cut out. Of course, this being Royal Trux, we knew to expect a little roughness around the edges… in the event, Accelerator would prove rougher than a speedball comedown wearing sandpaper undercrackers.

Fourteen-and-some years on, this reissue doesn’t add anything to the original by way of bonus materials or rejigged production; it’s purely and simply about getting the thing back into print. Within ten seconds of snotty narco-squall opener ‘I’m Ready’ tearing into its own riff-swollen gut, unspooling the contents and draping them haphazardly about the place, the decision feels pretty well justified. Accelerator’s savage vitality hasn’t diminished one iota in the intervening decade-and-a-half: quite what point it’s ultimately trying to make remains typically elusive, but you get the sense that it’s somehow been proved right in the long-run.

Vindication may not have done much for the album’s prevailing tendency toward sneeriness, but it certainly helps keep those claws feeling sharp. This was the first album RTX put out after being shown the door at Virgin, who had demonstrated breathtaking lack of foresight in scooping up our gruesome twosome on the back of excitable responses to their cult-baiting hot mess Twin Infinitives (1990, Drag City). The phlegm-clogged, digitally-frazzled harmonica sway of Dylanesque blame-a-thon ‘Yellow Kid’ thus scans like an eye-rolling middle finger to this inevitably doomed dalliance with major label arm candy (“I don’t like this arrangement / Your wild schemes are nothing but pipe dreams”).

Elsewhere, ‘Liar’ breaks its own spine over a crunchy, ascending four-bar riff, coming as close as any track here to playlist eligibility while pointedly refusing to shake hands with the concept, while one-time live favourite ‘The Banana Question’ sees a gleefully belligerent Herrema performing reluctant karaoke to her own distant, tequila-fogged memory of The Belle Stars’ ‘The Clapping Song’. Both, though, are relatively isolated in wearing any discernible Eighties influences on their sleeves: more dominant here are the shredded, fag-blistered blues chugs that form the arthritic skeletons of ‘Follow The Winner’ and ‘Juicy, Juicy, Juice’ (the latter perhaps the most explicit of numerous veiled nods toward Hagerty’s shrugging early involvement with Jon Spencer-era Pussy Galore).

Rather than the tunes themselves, then, it’s the almost sadistic levels of fuckaboutery – for want of no better word – obfuscating pretty much every chord change on the record that marks Accelerator out as ‘the Eighties one’. Guitars are hassled through so many gates it’s like Hagerty was locked in some demented, amphetamine-fuelled One Man and His Riff contest, while Herrema’s fuzzed-out vocal often sounds triple-tracked to the point of ghoulish disembodiment from the scabby, electrocuted torso of whatever’s going on downstairs. It’s not always an easy ride, and even the arch, wryly tender Bowieisms of incongruously slick closer ‘Stevie’ do relatively little to salve the grazes by the time you get there.

But hey, easy schmeasy: the point is, this could easily be a record getting its first release this month, not its second. More than the sniggering sarcasm of its production values, and much more than the content of its nine tracks, Accelerator by its very existence takes a snarling swipe at arguably the most recognisable trope of the Eighties industry – feverish commodification – and stands as gloriously bruised testament to the idiocy of big business in trying to wring cash from the inherently niche. With the longer-term hangover from those habits more apparent now than ever, RTX’s 'told you so's sound like they’re coming from anywhere but beyond the grave.