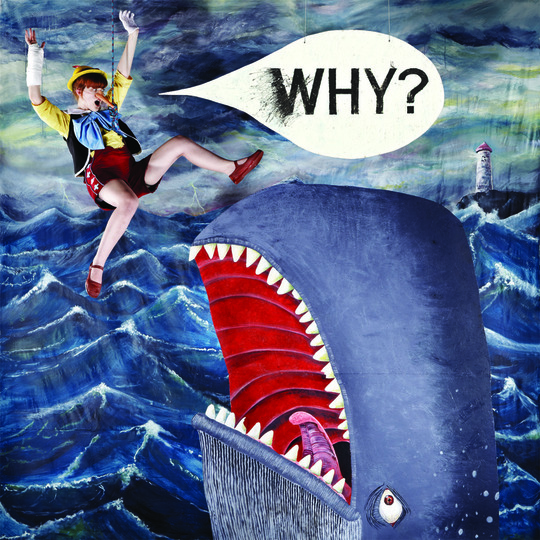 “I sleep on my back ‘cos it’s good for the spine…and coffin rehearsal,” sang Jonathan ‘Yoni’ Wolf on 2008’s extraordinary Alopecia.

From 2009’s Eskimo Snow: “A man should die gaunt / And not bloated and overdone.”

The closing track of Mumps, etc.: “I’ll hold my own death / As a card in the deck, to be played / When there are no other cards left.”

If there is a through-line that has come to define Wolf’s output since his Why? moniker expanded to full-band status with 2005’s Elephant Eyelash, it might be the frank cogitation on mortality that never seems to be too far from his thoughts. Which, to be sure, is selling the band a little short: Alopecia is a whip-smart, melody-fuelled opus that delves deep into Wolf’s subconscious, but is never anything less than a fascinating, invigorating listen. That Eskimo Snow gained a reputation as something of a downer can only be attributed to its predecessor’s near-perfect synthesis of seedy rhymes and indie-folk arrangements. Exploring more traditional song-based structures and placing less emphasis on Wolf’s nasal flow than previous efforts, what it lacks in impact it makes up for in resolve.

Which brings us to Mumps, etc., a work that took Wolf, his brother Josiah and Doug McDiarmid from their native Cincinnati to the Denton, Texas studio of Centro-Matic’s Matt Pence and has been ready to go for nearly a year now, as per the progress report Stereogum published in January. In that interview, Wolf struggles to define what fans might expect from the LP, expressing that it differs from its antecedents and is ultimately “its own thing.” He is right, no doubt, but that’s not the half of it. Mumps, etc. simultaneously feels like a fresh start and consolidation for the band; it encapsulates what makes them so unique while subtly expanding and pushing forward their sound, and as such must be viewed a real triumph.

‘Triumphant’, in fact, is one of the adjectives I used to describe the Sod in the Seed EP which provided the first taste of the new material back in July (DiS verdict here), though that was perhaps more of a reaction to the instrumentation on offer than anything else. It is not necessarily a word I would apply to Mumps, etc. as a whole, but the musicianship to be found over its 13 songs builds on that of the EP and is even more diverse and rewarding. A gorgeous harp figure heralds the brooding ‘Waterlines’ and horns stalk the refrain of ‘White English’; strings and woodwind furnish proceedings throughout, while an eight-person choir hovers dreamlike over several cuts. The band reached out to the University of North Texas’ Music School while recording, and the contributions of its players are integral to this album’s aesthetic and its success.

More than that though, they prop up what is, song-for-song, perhaps the most accomplished material the band has ever laid down. Not for nothing, I would suggest, is the opening song entitled ‘Jonathan’s Hope’, wherein both Wolf’s verses and the backdrop they rest on veer from the despondent to the (cautiously) optimistic. “A white dove on the hood of a two-ton truck” forms the central image here – one of numerous avian references deployed – and a reference to mangled fingers must surely pertain to the broken hand that kept Wolf out of action for a while. Illness and recovery (physical and spiritual) is a major theme of the record, Wolf’s psyche laid bare as ever in a series of confessional, elaborate lyrics. It is not many bands, however, that would couple a song ostensibly concerned with persistent bouts of depression to a trippy, sun-bleached parade of a video as Why? have with ‘Strawberries’ (seriously, watch it), which perhaps says more about their mordant sense of humour than I could ever hope to achieve via written analysis alone. The subject matter dealt with is often dense and weighty with self-doubt – the “hard times” Wolf mentions in the brilliant send-up of a documentary they made in promotion of the album – but it is never a hurdle to enjoying Mumps, etc. and its lush, confident backing.

One thing Why? have always excelled at is their ability to pull the rug from under the feet of their listeners and, amid torrents of discomfiting candour, drop a genuinely heart-wrenching line. This sometimes entailed carving their songs open to find a suitable moment for them – which was enormously satisfying in its own way – but is unnecessary on this record, where a song like ‘Kevin’s Cancer’ is resonant as a whole. “I know with no uncertainty / That I’m uncertain and I don’t know,” sings a resigned Wolf in the chorus, while impressionistic lyrics concerning chaos and dread and “vague, indefinite afterlife scenarios” populate its verses. It is a quietly moving, forceful two minutes, even before you find out it was written for an afflicted fan. What’s more, the following ‘Bitter Thoughts’, ‘Paper Hearts’ and ‘As a Card’ more than match it, closing the record in emphatic style; all stuttering beats, sharp delivery and, in ‘Paper Hearts’, something abrasive and tender all at once.

Mumps, etc. might be best viewed as an album of two sides; two exceptional runs that fall either side of centre-piece ‘Sod in the Seed’, the only song from the EP to feature here. At five minutes in length, its ruminations on (minor) fame and art as a commodity soon spiral into a breathless tumble of dark, gloomy and wickedly funny raps revolving around a sung chorus, eventually concluding: “Good and evil’s often neither strength or flaw / But sod in the seed of what you are.”

Perhaps this is the crux of what Wolf is trying to say on Mumps, etc.. His personality is to the fore, awkward, beset by death and doubt, yet knowingly smart and capable of real compassion, and ultimately not about to change much at this point. Then again… Try the last of the quotations that opened this review one more time. On ‘Distance’ he posits that “Men and women might yet quote his modicum of the truth / But never will they get right close to Jonathan Avram Wolf.” He could well be right; I’m surmising here, after all. But in the face of such generous melodies, witty lines and consistently strong musicianship, it sure is a whole lot of fun trying.