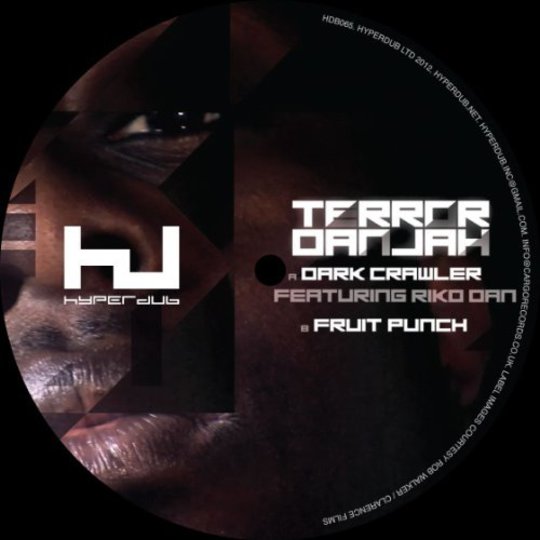 Every now and again an artist signed to Hyperdub will take off their safety goggles and lab coat, step away from their experimental sonic laboratory and - politely directed by either by Kode9 or their own guilty conscious - throw a bone to the starving grime hounds on the other side of the fence.

That time has finally come around again. After Cooly G’s romantically charged, sorrowful debut and LV’s recent South African Kwaito inspired release, I imagine the some punters are feeling a tad left out.

Creating music geared for the mainstream has clearly never been Hyperdub's forte, of course. Which is fair enough, but even they know there are simply times when we want to hear Riko Dan launch a barrage of violent patois lyrics over a gritty beat or hear Trim nonchalantly brag about his career or even do a spontaneous robot dance to some tasteful dubstep.

There is all that and more in Terror Danjah's second album,Dark Crawler, even for those whose tastes in UK bass music have transcended from dubstep and grime in the past few years.

It’s been two years since he released his ghostly and stripped down debut Undeniable, a record he admitted 'went over a few people's heads”', but he has since reverted back to the sound that made his tunes so appealing in the first place with Dark Crawler. Aka no holds barred raw grimestep.

If you ever had any doubts, you are guaranteed of the legitimacy of Terror Danjah’s new album on the self titled intro, with his trademark evil laugh sample opening the album up. But as the intro progresses to its predicted crescendo the intro suddenly ends before actually reaching it.

Light and airy female vocals floating over a sparse piano interlude take the place of what would have been a grinding bassline in the next track ‘Mirrors Edge’ before a mechanical rhythm drives it to new unforeseen depths.

‘Air Max 90’ featuring Champion is the standout track for me. It starts off sounding like a skeleton of an amateur FruityLoops track with its rapid flurry of snares and stripped down bassline before slowly picking up new elements and launching into a faux drop and then eventually, the real thing.

Throughout the album I got a sense of almost cartoonish playfulness, with the false drops, repeated use of the same rhythm on different tracks and barebones introductions. Things that made me think the tracks were not going anywhere only for me to be repeatedly and pleasantly surprised. It is a fun touch and one that made the record that much more interesting.

Dark Crawler might actually be Hyperdub's most mainstream release to date, relatable to everyone with even a slight penchant for UK bass music. There are moments of pure clean minimalism, sections of gritty dancehall, loved up R&B, raw grime and formulaic dubstep. In short, it’s got something for everyone.

Yet as an album it feels pure and uncontrived. There is no concept, because sometimes an album just doesn’t need to confuse itself with one, this is simply a collection of heavyweight dancefloor bangers and should be enjoyed as such. In other words, the grime hounds who have been hounding Terror for some scraps over the past two years have finally had their hunger satisfied. Bon appetite!