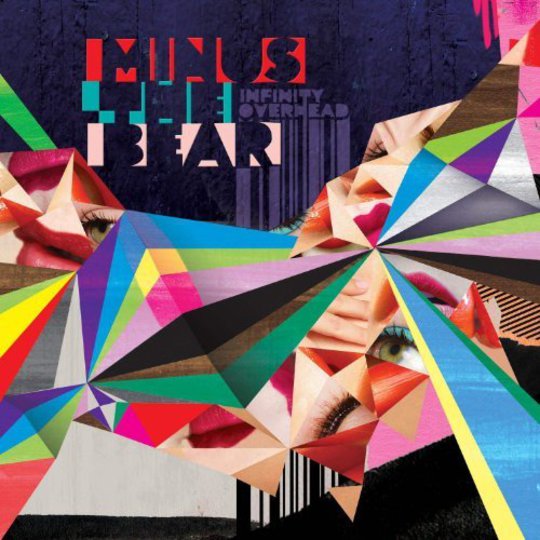 The Sex Pistols only managed to stick around for one album. The Libertines, Notorious B.I.G. and Amy Winehouse all deprived us, only scraping in with two studio albums apiece. Joy of joys, the Spice Girls managed three (but, consolingly, so did Nirvana), whilst thankfully The Smiths left us with four LPs. The Clash lasted for five albums proper, as did the Velvet Underground and Pavement. And now, Seattle indie veterans Minus The Bear can join this hallowed company, having unobtrusively racked up five albums and more than a decade playing together.

Evidently, they have decided, like Blink-182 and Green Day before them with American Idiot and Blink-182, that album number five is time to get serious. Gone are the gimmicky, joke album names, replaced by the vague but 'deeep, man' Infinity Overheard and its accompanying fractal album art.

Yet, once you actually start listening to the album, little has changed. Unlike previous electro-tinged effort OMNI the band have returned to what they know, displaying the old taut, technical post-rock and ambient indie, still modified by the familiar pop sympathies. They have returned to their former band-mate and long-term producer, Matt Bayles, and if you liked Minus The Bear before, you’ll certainly still like this. There has, however, been little development, and despite the ease of returning to their familiar modus operandi, Infinity Overheard does sound a little dated; it could easily form the soundtrack to some sunset-tinged teen angst in an E4 melodrama circa 2004. In frontman Jake Snider’s inadvertently dismissive words, “We didn’t go anywhere, but we’re back”.

Opener ‘Steel and Blood’ starts things promisingly, with a pleasing, chugging chord progression and the anticipated angular lead guitar twitching around underneath somewhat aggressive lyrics (”Two become one”, doesn’t sound very aggressive admittedly, but it’s in the context of a car crash...)

Next, ‘Diamond Lightning’ - apparently about a youthful acid trip – is strikingly reminiscent of earlier fare ‘Hooray’ and ‘Pachuca Sunrise’, but with ramped up processed guitars and classic acid-head descriptions (”Liquid concrete under our feet, tripping all the constellations we see, diamond lightning“) replacing the usual romantic tales.

A lot of the album from here on in merges together somewhat. It’s all very technically proficient and as ably math-rock as you’d expect, but there’s not much in the way of the catchy choruses that have made previous Minus The Bear albums such underground successes, and so suited to those 'alternative' One Tree Hill et al soundtracks.

Penultimate track ‘Lonely Gun’ is Infinity Overhead’s best song, with processed, synthy guitars chopping and bending in the background, driving the song towards its finger-destroying air-guitar solo. The guitars are drowning in FX, but it works well with the pure, repetitive vocals overlaid. There’s also a cheeky slice of steamy sax jammed in towards the end, which always gets you extra credit where I’m concerned.

Finally, ‘Cold Company’ takes a rockier turn, with more aggressive vocals and overdriven guitars, though it remains grounded by the chiming keyboards and subtle, cymbal-heavy drumming. It’s all very 'epic' and doubtless meant to be anthemic, but they don’t quite pull it off.

All in all, it’s very technically accomplished and well put together, but Minus The Bear would do well to work out the melodies to hang everything on before jumping in with the production and effects. Having long had a reputation as a intelligent guitar band with snappy pop hooks, this album would have been much stronger with a few more memorable choruses and hummable riffs, though perhaps I’m just missing the point of the techy side of math-rock. A step backwards, demonstrating that to rehash old sounds you need to prop them up with new tunes.