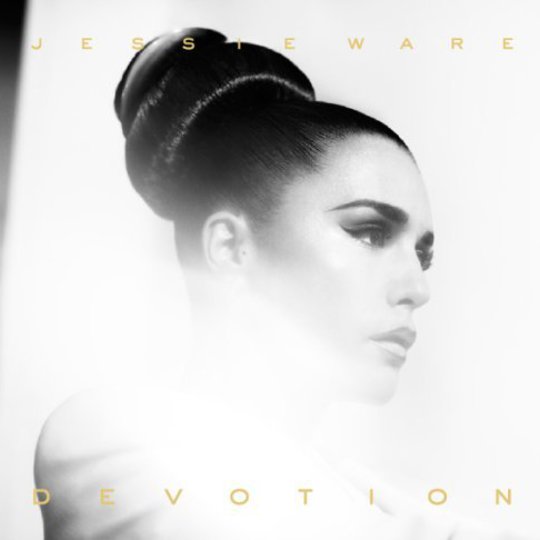 When the path forked for Jessie Ware and she had to choose which direction to take her solo career, the girl chose wisely. Prior to the release of Devotion, to listen to Jessie talk about her evolution as an artist, you couldn’t help but feel that it happened by accident, rather than by design. So, it has been a pleasant relief to hear Devotion – which appears to be very much the sound of a woman refusing to kowtow to the pressures of the in-crowd and making the music that she hears in her heart.

Somewhat impressively, Jessie Ware seems to have well and truly given the ‘guest vocalist’ tag the slip, and emerged as a fully-fledged artist; gentle and understated, speaking volumes, in a whisper. An easy comparison to make would be Katy B, whose solo work still seems to have an air of Katy B: The Voice and not Katy B: The Artist. Devotion takes its influence, in the main, from Eighties pop and soul. You can hear the dramatic ambition of Whitney Houston, the soft textures of Sade, too. She may have had Julio Bashmore, Dave Okumu (of The Invisible) and Kid Harpoon on production duties but overwhelmingly, this sounds like a work of Jessie’s creation; you sense that the producers have aided her vision, but not driven it.

The latest single, ‘Wildest Moment,’ is a highlight. As the beat comes in, like a broken waltz, it’s the perfect bedding for Jessie’s vocal. Laid-back and forceful, all at once, it mimics the turbulent friendship that she sings about. “From the outside, people must be wondering why we try…” It’s a love song, of sorts, but without the damp weight of romance weighing it down. She captures the emotion, without the shmaltz and in doing so, she neatly elevates her work above that of countless other mainstream pop singers.

Devotion contains just enough variety to make for an enticing listen. The old-school electro synth of ‘Running,’ the Annie Lennox-style vocal sat atop the spacious backing of ‘Still Love Me,’ the jazzy Hit Factory feel of ‘Sweet Talk’ and the power balladry of ‘Taking in Water’; it’s pop music, executed 100 per cent correctly: with soul, passion and intelligence. The fact that Jessie Ware rose through the ranks of the hipster dance scene will lend her a degree of credibility that she may not have captured, had she simply started her musical life alone. You can’t help but wonder if the response to these tracks would be the same, if some of those (‘OK to like’) boxes hadn’t been ticked along the way.

That she’s converted those ticked boxes into a license to turn expectation on its head is, in itself, an admirable thing. Ware could quite easily have served us up with ‘Dubstep Cuttings, Female Vocal, Volume 564’ but she was smarter than that, and, importantly, she was more honest than that and instead supplied a solid album of strong, emotive pop music that is currently in very real danger of usurping Whitney Houston’s 1987 long-player as the go-to musical comfort blanket of choice, in times of need.