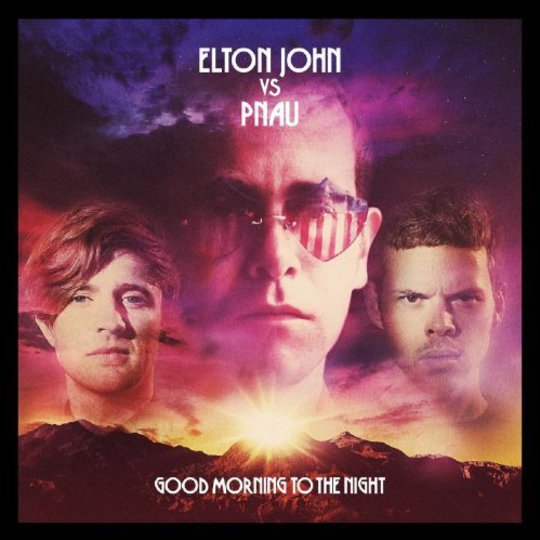 A certain long-held writers' block tip states that if you can't think of a creative approach to one subject, pair it up with a completely opposite subject and see what you get when you combine the two. The idea being that whatever you come up with, it'll be original and worth a listen/look/read. Well, this is exactly the premise upon which Good Morning To The Night seems to have been based. Take Elton John + Aussie dance popsters Pnau / baffling combinations = PROFIT.

Pnau's Soft Universe is, for this writer at least, exactly what pop should be: tales of heartbreak and woe, set against more day-glow sonic lunacy than you'd get from downing the contents of Hunter S. Thompson's car boot, then breaking open all the glowsticks of the land and bathing in the fluorescent goo because you too want to be a rainbow. It's balls to the wall, completely silly and even when it occasionally topples over in a heartbroken drunken stupor, a gleefully fun listen. And Elton John is... well, Elton John. Singer-Songwriter Extraordinaire, responsible for everyone on this earth wanting to burst into "caaaaaaaann yoooou feeeeeeeeeel THE LOOOOOOOOOVE tooooooooooooooniiiiiiiiiiiiiiiight" every time they see a David Attenborough show, thus explaining why night-time zoo openings are a Very Bad Idea. This entire EP exists, apparently, because of John's tutelage of Pnau, mentoring their hoped-for ascent from Aussie dancemeisters to worldwide pop svengalis in waiting. On paper it sounds like the worst kind of vanity project. In practice... well it's still a vanity project, but more intriguing and, frankly, fun than any such production has any real right to be.

Good Morning To The Night is really more of an experiment than anything else: beyond simple remixing, it seems to be asking the question of whether you can take the work of one artist, rework it so much that it becomes the handiwork of another artist, and still maintain the essence of whatever makes both those artists unique while creating something new. The result is basically these famous songs getting a Gokking, sounding less like the almost 40-year-old originals and more like an afternoon sunning yourself on the beaches of Ibiza.

The sheer number of songs sampled from John's back catalogue, specifically the lesser known elements of the 1970s era, intentionally limits any lyrical depth to that which can be summed up in a soundbite. Forget working out any deeper meaning: this is an arena where sound and the visceral response it invokes is everything, and lyrical intent takes the furthest of back seats. In its place: melody overload, with the title track, 'Sad' (based around the "it's sad, so sad" loop from 'Sorry Seems To Be The Hardest Word') and 'Phoenix' becoming firm earworms in their own right, even when not playing Spot The Sample.

Atmosphere is everything here, evoking the often slightly eerie feel of the party winding down lurking underneath many of the songs, especially on the likes of 'Telegraph To The Afterlife'. To Pnau's credit, the productions never seem drenched in the over-reverence that can and frequently does derail this type of project; precisely zero shame has been shown here in absolutely ripping the back catalogue to shreds in the pursuit of all new pop gems. You want straight rehashes with a donk on them? It ain't happening here. Whether John's more die-hard fans will approve of this treatment is up for debate, but for the more casual listener it's definitely a more engaging introduction to some of the less famous songs than just doing 'Rocket Man: The David Guetta LMFAO Techno Ibiza Raveotron Mix'.

Good Morning To The Night is not going to reinvent the wheel, provide breathtaking new revelations on Elton John's back catalogue or shine new light on Pnau's songwriting abilities. It's a bit too involved and complex to merely call this a remix album; at the same time, it's difficult to call it anything else, and trying to work out exactly what the point of it all is will give you a headache. Intellectualism will get you nowhere here; this exists mostly for its own sake. And profit, obvs. But for all of that, toes will tap. Oh, toes will tap all over the shop like a Gene Kelly meltdown. Let's all head on down to the Balearics and get our 1970s party on, shall we?