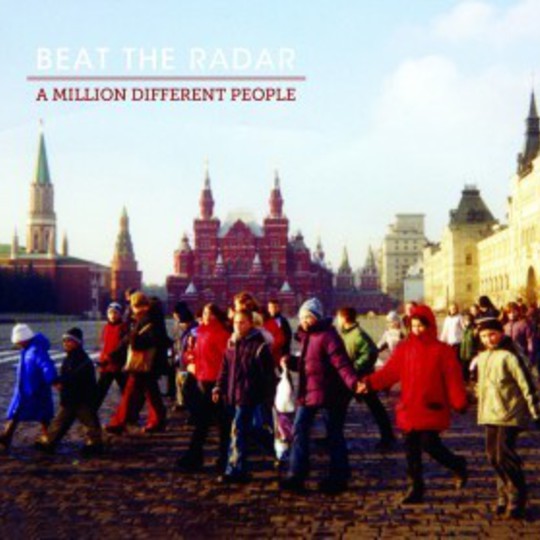 Beat The Radar’s second album is abundantly charming, in the way that every turn and fold of the record is organic, honest and delivered to the world with clear love and care. One of Manchester’s more engaging, interesting and beguiling guitar bands, they’ve always skipped that few steps ahead of the typical Mancunian cliché, while purveying simple and deftly honed pop songs sprinkled with melody, wit and a big, beating heart. The success of A Million Different People is based upon the fact that it knows its strengths, dismisses its weaknesses to hide in the corner, and doesn’t overly care about seeming cool or hip. It simply is itself. And consequentially, the record emerges with a sheer rattle of genuine joy that seems to metaphorically reflect the sunshine occasionally breaking through the rainclouds over the city.

The tone of the record is clearly marked out by the gorgeous lead single ‘Eyes’, an understated but succinctly sweet tribute to lead singer Jonny Swift’s daughter Lyla, as oddly soothing synth sounds burble round cyclical picking, piston-click rhythms and the soft vocals. It’s expertly delivered and possesses just the right melodic steps; swirling you around the room as lights blink beautifully around you. ‘America’ hints at early Ash in its sheer energy and unfettered confidence, while ‘Delighted’ possesses the sort of anthemic gloom that hints at dog-eared Chameleons records hidden away in their respective collections.

‘Sleeping on the Moon’ is sparse, elegiac and pretty: collapsing into a sweet heap of sensual vocals, guitar and bass. And the closing duo of ‘You Need Us’ and the title track show a nous and understanding of vocal hooks that bodes promisingly for the potential of Beat The Radar to seriously challenge mainstream radio playlists. While it would be overtly simple and discourteous to call A Million Different People a pop record (the post-punk influences are clearly on display, but never leant on too heavily), the most striking and praiseworthy aspect of the album is the band’s way of splicing idea after idea together like a musical KerPlunk; risking a topple at every turn but hanging on through sheer skill and strength of will. There’s also a delectable lo-fi approach taken to the production: that isn’t to say that the album sounds rushed or rough; more that the tracks crackle with a sense of unbridled enthusiasm, the energy coming through the speakers without being dissipated by unnecessary filters and overburdening effects.

No time for messing about and no filler, the whole thing punches the clock at just less than half an hour. The key to Beat The Radar’s charm and gravity is their ability to go down alternately weird paths, yet still remain on the straight and narrow towards the construction of a song. That is their purpose and fundamentally, also their key strength. Charming and intimate, yet musically diverse and intelligent; they’re a prime example of how the Manchester music scene isn’t all about people checking their reflections in the mirrored facades of Piccadilly Gardens and dwelling on a musical heritage long-gone. Some people just mean it, and know precisely how to say it without wasted words or overwrought sentimentality.