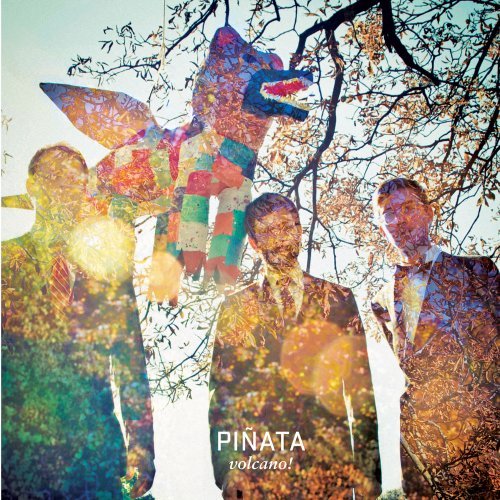 Piñata is an album of steady evolution, unveiling layers of sound and personality on each new pass. »

almost four years in the making, chicago trio volcano! have delivered the long-awaited follow-up to 2008's celebrated paperwork album. their outstanding third offering, 'pinata', is well worth the wait - by any measure it's their best yet. 'pinata' is the sound of volcano! past distilled into a most potent formula for the present: unsparingly concise, stickily melodic, lyrically stronger and stranger, darkly humorous, ferociously driven, fabulously inventive. clocking in at just over 40 minutes, the album has an aggressive energy that's as exciting as it is unpredictable. it's leaner and meaner than its predecessors, with the themes behind the songs drawn from more familiar sources. "they're mainly based on weird fantasies," says frontman aaron with. "our goal was to tell stories with strange but universal sentiments."
the fantasies that form the foundations for certain songs are hardly commonplace musings on love and life. 'child star' imagines its protagonist (re)born with all the skills and experience of a previous life, gaining competitive advantage over a helpless peer group. 'st mary of nazareth' takes the listener on a tour of a spaceship disguised as catholic hospital, where the nurses are nuns, and the nuns are aliens. lead single 'pinata' is a petty vision of posthumous karmic retribution, while 'fighter', the album's dramatic centrepiece, is a violent revenge fantasy set to music. but while the songs can be complex conceptually, the incisive compositions ensure they effortlessly get under your skin. more immediate than anything the trio has crafted before, it makes perfect sense that at the time of writing 'pinata', volcano! were indulging themselves on radio hits alongside a steady diet of music from the outer reaches of the spectrum. meanwhile the band has lost none of the playful, idiosyncratic elements that make them unique. "we kept the weird energy, the melodic tension, and the neurotic rhythm," says with, "but we've made the framework a little more decipherable." not a second is wasted as volcano! gleefully take a baseball bat to musical convention in the name of great pop.
description from www.roughtrade.com