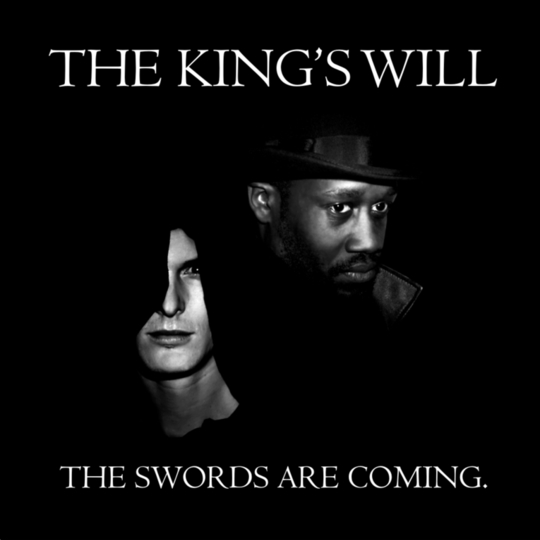 Somewhere between the posh ‘iLL Manors’ parody and Speaker’s Corner stands The King’s Will: two angry musicians who may just have had the last original idea in town. Giles Hayter is an art composer, writing muzak for installations that’s played quietly for fear of complaints in the comments book. Musa Okwonga is a football reporter and part-time poet, who recites some of the angriest, most well-spoken verse outside of the Downtown Abbey rap battles. He’s encouraged Hayter to turn his music up to 11, and the pair of them have cooked up nine carousing covers of Rik Mayall’s ‘Noble England’, written for a future that looks more and more like RoboCop, but with no sign of the part man/part machine/all cop hero.

Going straight for the throat, Okwonga commentates on the state of the nation, his posh voice as compelling as an MP telling the truth. He’s as in love with modern culture as he is disgusted by it, and isn’t beyond some chemical naughtiness on ‘The Dancefloor is an Ocean’, where he serenades clubland while bopping to trance. ”The dance floor is an ocean we float our boats in / We come in search of moments where minds like seas are open / The most morose of loners take comfort in commotion / Connected to those closest although no words are spoken”. It’s a treat after the crashing dubstep of the title track, where bass and percussion square off like someone starting a speedboat. Okwonga rolls his vowels as though he’s Henry V on meow-meow, going on to experiment with pop (‘Pig City’), and a touchy ambient moment on ‘Passport’, where he holds his dead dad’s visa and fishes a poem out of it.

Unfortunately there’s only so long you can endure the enlightenment before you start feeling you’re at a church service; a progressive one, with MacBook turntables in place of the organ. Aloofness hangs over The King’s Will, with ‘Freedom of Speech’ jumping from synths to hardcore played on calculators. ”What will it take to explode? / Each day they cause more pain! / How long will it take for my back to break?” screams Okwonga over Hayter’s beats and whoops, like an English teacher trying to rev his class up. It doesn’t take much to turn him crimson, and the comedown’s just as ugly, with ‘So Leopard’ finding him mumbling about his inability to change, and wallowing in jazz.

Luckily, he knows when to change tack. On ‘Human After All’ he hangs his head, remembering the brother’s girlfriend he ran off with, his high ground suddenly in the toilet. The pompous anger turns back into reason and incisiveness, reestablishing Okwonga as a visceral lyricist in the mould of Malcolm Eden (the bloke Richey Edwards tried to be). Theatrical enough to be an idol, and with a competent producer behind him, the Hugh Grant of hip-hop makes The Swords Are Coming marketable: if it could get on Fearne Cotton in place of one Tulisa song, that’d be a victory. If not, it’s still a small victory in itself, like someone got Orbital played inside the House of Commons.